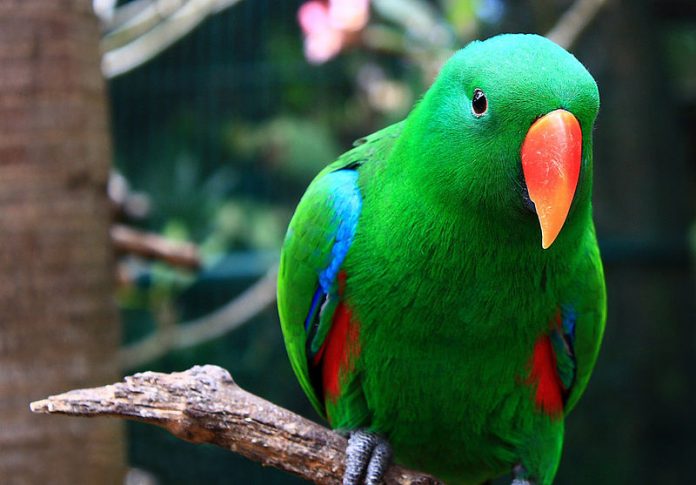 Green is a dominant colour in many parrot species around the world, including those frequently kept as pets. If you’ve spotted a green parrot, you can identify the bird by its size, feather pattern, and more. Some green parrots have additional bright colours mixed into their plumage while others have more subtle markings.

These birds are intelligent and full of personality, and they require a committed caregiver. If you’re considering adopting a bird, here are eight popular green parrots to choose from. 1. Budgerigar
Perhaps the most well-known pet green parrot is the budgie (or parakeet). While not solid green, common budgies are a mixture of yellowish-green interspersed with black spotting and striping patterns. Budgies are very smart and social, yet they’re still fairly easy to care for. They can be housed in a relatively small space compared to larger parrots, but they do need lots of mental and physical exercise. 2. Male Eclectus
One of the most striking green parrots is the Male Eclectus. The Eclectus is sexually dimorphic, meaning you can tell the bird’s sex by its plumage. If you’ve spotted a large, bright green parrot with a prominent orange beak, chances are you’ve seen a male Eclectus. Females are primarily bright red. These birds are very social and affectionate but can easily become stressed if they feel neglected. 3. Lovebirds
Each lovebird species displays different colours, but nearly all of them have a variety that’s primarily green. Lovebirds are small birds with big personalities. Their name suggests they are very affectionate, and many well-socialized lovebirds can be. But if these little green parrots aren’t handled regularly, they can lose their tameness, which might result in a nippy bird. 4. Indian Ringneck Parakeet
While selective breeding has given rise to an array of colours, Indian ringneck parakeets are most commonly pastel green. These green parrots are not the best choice for inexperienced bird owners. Ring-necks often go through a “bluffing” phase during adolescence, characterised by hormonal aggression. They’re also quite smart birds that require lots of mental and physical stimulation to keep them happy.]

Courtesy of the Spruce Pets

VIDEO: Top 8 green parrots as pets in the world

How to Teach Your Pet Bird to Talk