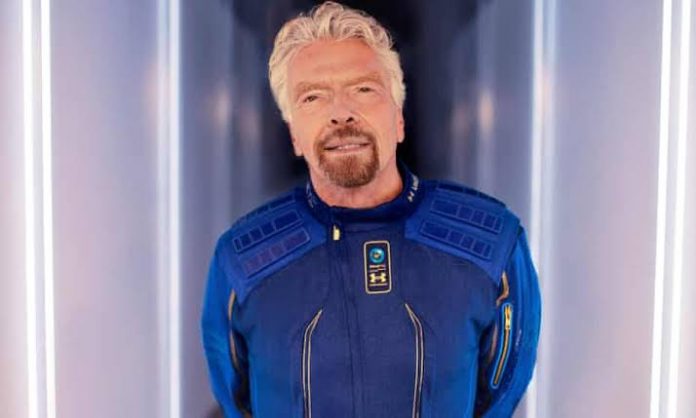 Check out the first billionaire in space

This successful flight which happened on Sunday, as reported by Bloomberg, paves the way for commercial space adventure, something that Branson has dreamed of since 2004.

Virgin Galactic’s commercial flights to space for wealthy passengers are billed to commence in 2022, with seats on the spacecraft likely to sell for more than $250,000 per passenger. So far, the company has a backlog of 600 confirmed passengers interested in an adventure to space.

The Bloomberg report noted that today’s test flight was the spacecraft’s 22nd test flight and first with a large crew. It is also the first of two tests that the company has scheduled for this summer before an astronaut-training mission with Italian Air Force personnel later in the year.

“I was once a child with a dream looking up to the stars. Now I’m an adult in a spaceship looking down to our beautiful Earth. To the next generation of dreamers: if we can do this, just imagine what you can do.

READ ALSO: The stories of my dogs Part 2

Welcome to the dawn of a new space age.”

Bloomberg reported that the VSS Unity spacecraft “glided back through sunny skies to land in New Mexico at about 9:38 a.m. local time, shortly after detaching from a carrier aircraft and rocketing to an altitude of about 282,000 feet, or more than 53 miles (86 kilometers) above the Earth.”

The names of the other crew members who took part in the successful test flight are Dave Mackay, Michael Masucci, Sirisha Bandla, Colin Bennett and Beth Moses, all key members of Virgin Galactic’s space team and part of the test flight to observe various technical parameters in-flight.

In case you missed it

Last month, America’s Federal Aviation Administration cleared Virgin Galactic to fly customers into space, boosting shares of the company. On Friday, the company had a market value of $11.8 billion and announced it will resume ticket sales after the summer’s test flights.

Billionaires Elon Musk of SpaceX and Jeff Bezos of Blue Origin are also in the race to offer space tourism options to rich clients. Virgin Galactic’s space trip has come nine days before Amazon.com Inc. founder, Jeff Bezos, plans to fly to space on a rocket made by Blue Origin, his space venture.