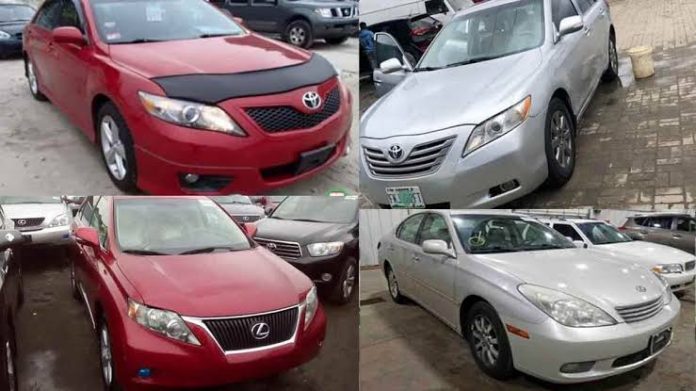 Why Tokunbo car prices may soon go up

The cost of used vehicles popularly called “Tokunbo cars” may spike in the coming months due to an economic phenomenon termed imported inflation.

Imported inflation is a rise in the cost of raw materials or finished goods imported from a country of origin that is experiencing high inflation.

The rising inflation on consumer goods in the United States of America is on the verge of triggering a wave of imported inflation into Nigeria, with a focus on used cars, a major imported item from the world’s largest economy.

How it affects Nigeria

Over 20% of Nigeria’s imports from the US are used vehicles. Nigeria is a huge market for used cars, imported from Europe, America and other foreign countries, however, the United States of America is the leading country of import for Nigeria.

According to data from the National Bureau of Statistics, Nigeria imported about N140 billion of used vehicles in the 1st quarter of 2021 and N150 billion in the 4th quarter of 2020.

Based on this, Nairametrics believes rising inflation in the United States is expected to affect countries that rely on its finished goods.

The rate of expansion in U.S consumer prices unexpectedly accelerated in June, casting doubt on the Federal Reserve’s (their CBN) and the White House’s conviction that rising inflation during the nation’s recovery will be temporary. The Bureau of Labour Statistics reported a monthly price increase of 0.9%, the largest one-month increase since June 2008.

So far, the most dramatic price increases have occurred in sectors directly affected by the coronavirus pandemic. Travel-related costs, such as airfares, have risen, while a semiconductor scarcity has contributed to an increase in used car prices.

According to the US Bureau of Labour Statistics, a record increase in previously used vehicle costs accounted for one-third of the CPI increase last month. They increased by 10.5% in June over the previous month.

The US Federal Reserve has described this year’s high inflation figures as “transitory,” meaning they will diminish when Covid-19 lockdowns relax and supply catches up with pent-up demand.

Policymakers in the US forecasted in June that their core inflation would climb by 3% this year before falling to 2.1% in 2022. However, the central bank may be under pressure to consider lowering monetary support by decreasing asset purchases more rapidly than originally anticipated in light of Tuesday’s unexpectedly high inflation figure.

Economists predict that this rise will have an impact on nations that rely on U.S products since they would have to pay more for consumer goods sourced in the U.S.

Nigerians have a strong appetite for imported vehicles and other consumer items from the United States and this is anticipated to have a detrimental impact on the nation’s economy, as it is likely to raise local inflation rates and increase economic hardship.

Coupled with the spiralling value of the naira against the dollar, the imported inflation could more than likely exacerbate economic conditions for middle-class Nigerians making it even more difficult to afford basic life needs.

READ ALSO: Good news for Nigerian manufacturers-Check it out

Other ancillary charges associated with importation such as clearing cost

If the cost of used vehicles rises for importers this could morph into higher transportation and logistics expenses, a perfect storm for sustaining higher inflationary levels.

Nigerians looking to purchase imported Tokunbo cars may have to front-load expenses if they are to avoid the risk of paying more for vehicle imports due to imported inflation.

This might mean securing your foreign exchange as soon as possible and paying for the used cars rather than waiting till the prices go up.

The other option might be to wait till the U.S inflation dissipates as some economists predict. However, there is no assurance that this will materialize.