How come Naira is falling even with increase in dollar supply? See details 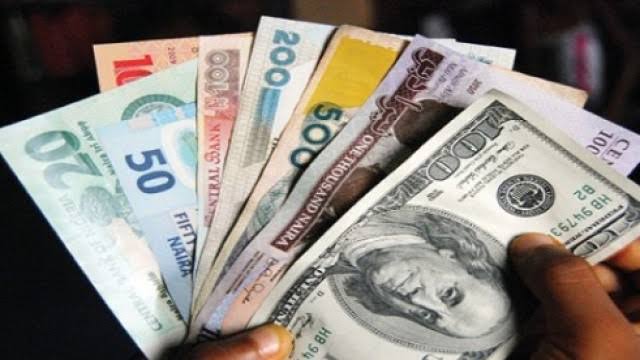 How come Naira is falling even with increase in dollar supply? See details

Monday 19th July 2021: The exchange rate between the naira and the US dollar closed at N411.67/$1 at the official forex market.

At the parallel market, however, the naira appreciated against the US dollar at an exchange rate of N503/$1, a gain of N3 when compared to the N506/$1 that was recorded on Friday 16th July 2021.

On the other hand, the dollar supply at the official forex market rose by 44.3% on Monday to stand at $168.19 million as external reserve continues its rebound.

READ ALSO: Check out the rank of Nigerian passport amongst 199 countries in the world

The world’s most popular and largest cryptocurrency, Bitcoin, recorded a significant increase on Wednesday evening to close at $31,978.52, rising by 7.11%, after dropping below $30,000 on Tuesday for the first time in 4 weeks.

Bitcoin and other cryptocurrencies recovered on Wednesday after a brutal sell-off, with the world’s biggest digital coin climbing back above $30,000.
The price of Bitcoin which was up by over 7%, traded as high as $32,383 on Wednesday, according to Coin Metrics, with other smaller cryptocurrencies Ether and XRP also rebounding, up around 9% and 6% respectively.
The crypto market saw significant selling on Tuesday, with Bitcoin falling below the $30,000 mark. The plunge came on the back of news that the New Jersey attorney general issued a cease-and-desist letter to crypto lending firm BlockFi, ordering it to stop offering interest-bearing accounts.
The reason for the Wednesday upswing wasn’t immediately clear. Cryptocurrencies often undergo severe price fluctuations.
Meanwhile, the second-largest cryptocurrency by market capitalization, Ethereum, was up by 9.53%, to close at $1,970.20

Crude oil prices dipped after the Energy Information Administration (EIA) reported a crude oil inventory build of 2.1 million barrels for the week to July 16.
Last week’s inventory build compared with a draw of 7.9 million barrels for the previous week and an estimated and shocking increase in crude inventories of 806,000 barrels, as reported by the American Petroleum Institute on Tuesday.
JPMorgan analysts said global demand is expected to average 99.6 million barrels per day in August, up by 5.4 million barrels per day from April.
Brent Crude dropped by 0.37% to close at $71.96 per barrel, WTI also dropped by 0.30% to close at $70.09, Natural Gas dropped by 1.41% to close at $3.903, while OPEC basket dropped by 2.84% to close at $73.15 per barrel.
However, the Bonny Light rose by 3.70% to close at $70.87 per barrel.
Oil prices have been particularly volatile this week, seeing one of the largest single-day oil price drops ever on Monday as growing fears about the Delta variant and OPEC+ production increases sour the overall industry outlook.
Meanwhile, the Organisation of Petroleum Exporting Countries (OPEC) has predicted a gradual recovery in demand for crude oil this year and next, as the group agree on a deal to revive the production still shuttered since the pandemic

Nigeria’s reserve had recorded a significant reduction in recent times, losing about $219.42 million month-to-date and about $2.27 billion from January to date.
The change in tide to a positive is an indication of increased forex earnings, which would come as a relief for Nigeria, as an increase in external reserve will help Nigeria meet up with pent-up financial obligations.
The increase will also serve as a relief for Nigeria’s exchange rate, which had been on a downturn lately, crossing the N500/$1 mark at the parallel market.