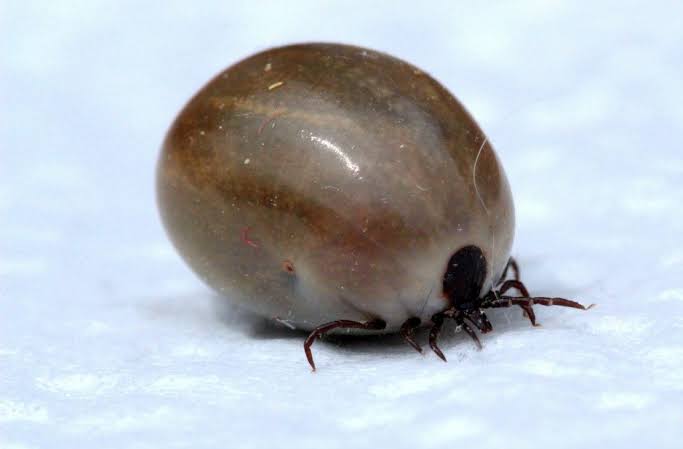 Each adult tick can lay between 4,000 and 5,000 eggs, mostly in cracks and on vertical surfaces in kennels and homes.

The tick’s leaving the dog between it blood banquets can give a false sense of security in tick control. Just one tick on a dog or a well calls for emergency measures. An insecticidal spray should be jetted into all the crevices and cracks of the vertical surfaces in the house: the fumes have to come into direct contact with the various stages of the tick’s life cycle. There are past-control companies that will fog a house; this involves toxic gas seeping into all the crevices in the walls, the door and window frames, and the animal’s sleeping quarters.

Insecticides are potentially dangerous and should be used with caution. Especially should all young children be out of a room when it is being sprayed. After the tick or ticks are removed from the dog—by hand, dip, or spray—the dog and premises must be watched vigilantly for reinfestation.

In pulling ticks off the dog’s body, reach to the base of the skin to get the head of the tick, which is usually buried in the superficial layer of the skin. A tweezer of forceps is much better than fingers. An aerosol spray can also be applied to the tick until it falls off. Ticks live inside the ears and attach themselves to the dog’s eyelids, requiring delicate handling in removal. After a tick has been removed, an antiseptic should be applied to the spot on the dog’s skin.\

When a tick knocked off or pulled off but the head is left under the skin, the embedded head can cause infection if not removed. If squeezing the skin doesn’t make the head pop out, a razor blade or sharp knife may have too be used to slit a small opening in the skin. Hydrogen peroxide or used antiseptic should be applied daily until the sore is healed.

READ ALSO: How to clean your dog’s ears

An infection of ticks on a dog can cause tick paralysis— complete paralysis of the body—and unless the animal is rid of the tick, it can cause death. It can also cause a dog to be anemic from extreme loss of blood, which will show up in lack of vitality.

The wood tick, which infects man with Rocky Mountain spotted fever and for which the dog is one of several intermediate hosts, is not confined to the Rocky Mountain region as was once thought. The infection may be acquired over a considerable portion of the United States, east as well as west, and in Canada.

The disease is spread to man by the bite of the wood tick. The seriousness of the disease make tick control by dog owners even more essential—in the dog and in homes and kennels or whatever ticks will live.