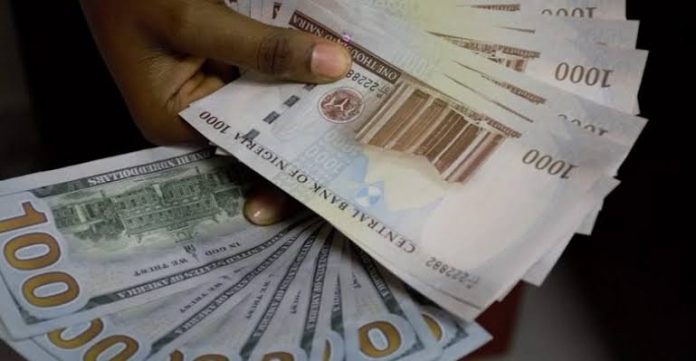 The exchange rate between the naira and the US dollar closed at N412.75/$1, at the official Investors and Exporters window.

The exchange rate at the parallel market hit a new all-time low on Monday to close at N550/$1 compared to N545/$1 recorded in the previous trading session. This represents a 0.92% depreciation and further widens the gap between the black market rate and the official rate.

The local currency continues its unprecedented fall at the black market following CBN’s actions to channel forex demand away from the window and buyers scramble to buy the scarce dollars.

Currency speculators are taking advantage of the huge exchange rate difference between the official market and the black market.

The slump at the black market comes on the heels of increased forex demand pressure and a sharp decline in dollar supply.

Individuals and businesses have to rely on the black market for their foreign exchange requirements because the banks appear to be rationing dollars. The apex bank’s plan to curtail the illegal market by banning sales to money traders and reprimanding people who profit from the arbitrage seems not to be working and dealers are speculating the currency will weaken further.

The Central Bank of Nigeria had earlier stated that it is closely monitoring the forex transactions of banks operating in the country and warned them against all forms of malpractices threatening that those found culpable would have their foreign exchange operating licenses suspended for at least a year.

The exchange rate depreciated against the US dollar on Monday 13th September 2021 to close at N412.75 to a dollar, representing a 75 kobo drop compared to N412/$1 recorded in the previous trading day.

According to data tracked by Nairametrics from FMDQ, forex turnover increased from $88.39 million recorded on Friday to $161.82 million on Monday 13th September 2021.

The world’s largest and most popular cryptocurrency, Bitcoin, was up by 1.32% to trade at $45,394.26 early on Tuesday morning after dropping on Monday.

Cryptos had earlier crashed on Monday after Walmart said that a widely reported press release announcing it would accept crypto payments was fake saying it doesn’t plan to start accepting Litecoin.

READ ALSO: Great advice from successful entrepreneurs to help you succeed in any business

The Chairman of Nigeria’s Economic and Financial Crimes Commission, Abdulrasheed Bawa has hit on the risk associated with Bitcoin and other cryptocurrencies to the world economy. According to him, many criminals now play significant roles in crypto-currency markets, adding that virtual currencies had become their preferred medium of exchange.

Crude oil prices went up with Brent crude rising by 0.78% to trade at $74.08 per barrel on shocking OPEC report.

OPEC on Monday said that the surge of the Delta variant around the globe is set to partially delay oil demand recovery into the next year when robust economic growth and stronger recovery in fuel consumption will see global oil demand averaging 100.8 million barrels per day (bpd) and exceeding pre-Covid levels, raising its 2022 demand forecast by a shocking 900,000 bpd.

This year, total global oil demand remains unchanged at 96.7 million bpd for the whole of 2021. But the fourth-quarter demand was revised slightly down, by 110,000 bpd from the August estimate of 99.82 million bpd to 99.7 million bpd now, OPEC said in its September report.

Nigeria’s foreign reserve rose by $80 million to close at $34.859 billion on Friday, 10th September 2021, compared to $34.779 billion recorded as of the previous day. The latest increase represents a 0.23% boost in the country’s foreign reserve.