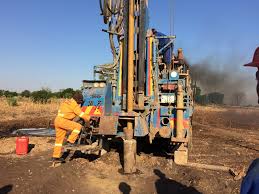 Stakeholders have called on the government to regulate the way boreholes are being sunk indiscriminately to prevent the possible occurrence of a natural disaster like an earthquake in the country.

The National President, Association of Water Well Drilling Rig Owners and Practitioners, Michael Ale, said this in Ibadan on Thursday in an interview with journalists, on the sidelines of the national advocacy/sensitisation workshop on 2013 National Water Resources Master Plan and United National Water Convention for stakeholders in the South-West.

Ale, who said boreholes were being sunk everywhere without any form of regulation could cause danger for the people in the future despite Nigeria not being situated in an earthquake-prone area. “Nigeria is not in an earthquake-prone region, despite that, we are having earth tremors now. It happened in Saki and other places and this is to say an earthquake can happen if we continue the way we are doing things.”

He also said that fewer boreholes would be sunk if the government would provide pipe-borne water to the citizens.

The Permanent Secretary, Federal Ministry of Water Resources, Dido Walso-Jack, said in her address that the ministry would hold zonal workshops in all the six geo-political zones of the country preparatory to a national workshop where discussions will be held with relevant stakeholders.

She said, “You may recall that the 1995 Master Plan, which was developed by the ministry in collaboration with Japan International Cooperation Agency, was the first comprehensive development plan aimed at optimization of the nation’s water resources as well as financial and economic investment options in water resources development.

“The goal of the plan was to achieve accelerated growth, interpreted and coordinated water resources development and management, agricultural production and food security.”

The Chairman of Oyo State Rural Water Agency, Nureni Omirinde, urged the ministry to always ensure that the people that would implement policies were always carried along during their sensitisation workshops so that the policies would not encounter hitches at the millennia till levels.