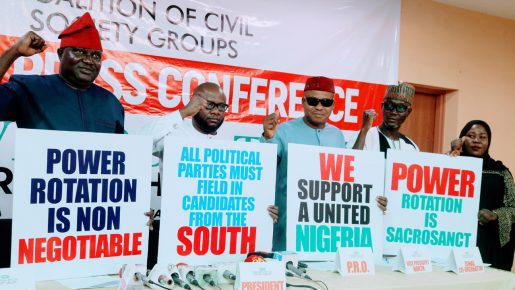 Coalition of Civil Society Groups (CCAG) in Nigeria has cautioned that the current security situation and supremacy of a region dominating the affairs of the country is affecting the nation’s unity.

President of CCSG, Bassey Etuk Williams, who stated this, in Abuja, during a world conference, vowed the body would deploy its structures across the 36 states of the federation, including the Federal Capital Territory (FCT), to further project the call for a Southern presidential candidate, to save the soul of the country.

Williams said the coalition was watching with keen interest various agitations across the federating units, and had come up with an agenda of championing and clamouring for power shift to the South, come 2023.

He said: “There is no doubt that the North has had its fair share of the country leadership. Now, it is time to zone the Presidency to the South.

“Since the return to civil rule in 1999, there has been an “unwritten” agreement for power rotation between the North and South.

“We have witnessed a sharp division along religious line, ahead of 2023 general elections. The current security situation and supremacy of a region also affect the nation’s unity.

“Political gladiators across the divide have taken up arms and fight through exchange of words on power rotation. Some want it to remain in the North, while others want it back to the South.

“Presidential election in Nigeria is highly influential and powerful, as we all confer greatest sense of belonging to the federation on any ethnic or geopolitical zone that produces the President.

“This, no doubt, has deepened the agitation for power shift by various regions, and we thus resolve to implore all major political parties to have a rethink ahead of their convention and zoning, by ensuring the country remains united by zoning the presidential tickets to the South in 2023.

He said: “Northern region has been in power since 2015, and after exhausting the constitutional eight years by 2023, it is expected that power should go to the South. This can guarantee peace and unity of the country.

“Rising from our expanded national executive meeting, we resolved to get involved in the call for power shift to the South in 2023. Let it be known that, there won’t be either All Progressives Congress (APC) or Peoples Democratic Party (PDP), if there is no country called Nigeria.

“National interest must override personal interest, especially for those who are pushing parties to jettison conventional rotation agenda of presidency. Both parties should follow what will retain the country’s unity by zoning presidency to the South.”

“The country is overwhelmed with myriads of problems, ranging from insecurity, banditry, terrorism, decayed infrastructure and we must not compound the woes of the country again.”