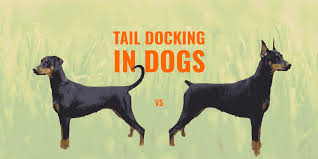 Tail Docking in Dogs(A must read) Some dog breed standards and traditions specify or allow the amputation of part of a dog’s tail. In the United States the tails of dogs belonging to certain breeds are often docked, in both working and pet situations. Although cosmetic surgery is generally not allowed to be performed on show dogs, tail docking is an exception for breeds in which this is customary.

Docking
Puppies’ tails are docked during the first five days of life, either surgically or with a constricting band.

Welfare concerns: risks
The welfare and ethical issues surrounding tail docking have been extensively reviewed, but the practice has been the subject of very few controlled studies. There are few studies reporting on the short- or long-term consequences of the procedure or comparing the health and welfare of docked and undocked dogs.

Pain – Surgical amputation of the dog’s tail produces behaviors indicative of acute pain. There is evidence in many species that noxious stimuli in the perinatal period may permanently alter the normal development of the central nervous system and have negative long-term consequences.

Complications – As with any surgical procedure, there is potential for complications, such as excessive bleeding, infection, delayed healing and necrosis. Neuromas, which have been associated with chronic pain, may develop, but their incidence and persistence is not known.

Chronic Health Issues – It has been suggested that dogs whose tails are docked may have underdeveloped pelvic musculature; the evidence, however, is not conclusive. Dogs of breeds that are docked have a higher incidence of incontinence; however, this may be due to traits other than docked tails. Dogs with docked tails within some breeds may have less well developed levator ani and coccygeus muscles.

Behavioral Issues – The tail of dogs is important for intraspecific communication and provides information about emotional states and social status, however the behavioral effects of tail docking have not been well studied. Using a life-sized remote-controlled dog model with varied tail length Leaver and Reimchen concluded that a longer tail length is more effective at conveying intraspecific cues than a short tail.

Other Issues – The value some communities place on docking may indirectly affect animal welfare if it motivates less skilled persons to carry out a procedure when a veterinarian refuses to perform that procedure, or if a dog whose tail is not docked is less able to be placed in a suitable home.

Reasons given for the practice
Human Benefits – The primary reason for tail docking appears to be maintenance of a distinctive appearance for a particular breed, and to take part in an ongoing tradition.

Animal Benefits – Tail injuries are generally rare, with an incidence of 0.21 to 0.39% being reported in dog populations per year. In the largest study to date the incidence was 0.23%.

It has been suggested that certain breeds of dogs, or dogs used for specific purposes, have a greater incidence of tail injury. An uncontrolled study of German Shorthaired Pointers in Sweden suggested there might be a high level of tail injury subsequent to a ban on docking. Houlton (2008) surveyed injuries to gundogs and found undocked Springer or Cocker Spaniels were more likely to suffer from tail injuries. In a study conducted in the United Kingdom, Diesel et al also found Springer and Cocker Spaniels had a higher risk of injury (risk estimate 0.45% and 0.37%). Interestingly, the breeds having the greatest risk of tail injury in that study were Lurchers, Whippets and Greyhounds (risk estimate 1.22%), but there has not been a move to prophylactically dock these breeds. Other dog breeds that are not docked, such as Border Collies and Rough Collies, had a risk estimate of only 0.08%. Diesel et al reported that working dogs (predominantly gundogs) were not at significantly greater risk of tail injury than non-working dogs, but dogs that were kenneled were at increased risk.

It has also been suggested that accidental tail trauma to the adult dog causes more suffering than amputation early in life. However, puppies are rarely provided analgesia when their tails are docked and the short-and long-term effects of painful procedures in neonates of many species are well documented. It has not been demonstrated that dog breeds whose tails are traditionally docked have a significant risk of tail trauma that would justify the docking of their tails.

Although tail docking may reduce the risk of tail injury, based on the most current data available, approximately 500 dogs need to be docked to prevent one tail injury.

Alternatives
Bobbed Genetics -Several breeds of dog produce offspring with a naturally short or “bobbed” tails. Bobbed genetics can been introduced, or selected for, in traditionally docked breeds.