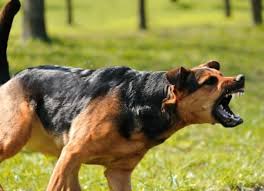 Why Do Dogs Behave Aggressively?
Aggressive behavior in a dog refers to any behavior connected with an attack or an impending attack. This includes becoming still and rigid, growling, snarling, baring teeth, lunging, and nipping or biting.

Your first step toward stopping this behavior is to figure out what is causing your dog’s aggression. Some dogs growl as someone approaches them while they’re eating or chewing a bone, for instance. Others react aggressively toward children or strangers.

The aggression doesn’t have to be directed toward a person either. Some dogs become aggressive around other animals, only specific animals (cats but not other dogs), or toward inanimate objects, such as wheels on vehicles or yard equipment.

The key thing to keep in mind is that you can’t come up with a plan to modify your dog’s behavior until you know the reason behind it. The most common types of dog aggression include:1

Frustration-elicited aggression: The dog behaves aggressively when it’s restricted on a leash or in a fenced yard. When the dog becomes stimulated and can not act on that stimulation, it may act out. Sometimes a dog may become overly excited, such as before a walk, and nip its handler.
Redirected aggression: The dog might become aggressive toward a person who attempts to break up a dog fight. It may also happen when the dog can’t reach the target of its hostility, such as a neighboring dog on the other side of a fence.
Pain-elicited aggression: The dog shows aggression when it’s injured or in pain.
Sex-related aggression: Two male dogs or two female dogs become aggressive when vying for the attention of a mate. This applies to intact animals and can be avoided by spaying and neutering dogs.
Predatory aggression: The dog behaves aggressively without much warning when exhibiting predatory behavior, such as when chasing wildlife. This instinct may become a serious danger when a child is playing chase with the dog. It may start out as an innocent game, but dogs with predatory aggression may quickly turn on and possibly bite the child.
Predatory aggression
Signs That Your Dog May Become Aggressive
Any dog can pick up aggressive behavior, and it’s important to track a pattern of warning signs, like:

Growling and snapping
A rigid body and quickly wagging tail
Lip licking or yawning
Averting gaze
Raised fur
Cowering and tail tucking
Seeing whites of the eyes
Not all dogs who exhibit this behavior are generally aggressive—many of these warning signs are also an indication of anxiety or fear.

How to Stop Aggression
Make a note of when your dog becomes aggressive and the circumstances surrounding the behavior. This will play an important part in determining your next step. It is essential to deal with the underlying cause of the aggression. The behavior is just a symptom of an underlying problem. There are a number of ways you can manage the hostility and help your dog remain calm. It will take time, consistency, and possibly the help of a professional.

See Your Veterinarian
Dogs that aren’t normally aggressive but suddenly develop aggressive behaviors might have an underlying medical problem.2 Health problems that may cause aggression include hypothyroidism, painful injuries, and neurological problems such as encephalitis, epilepsy, and brain tumors.

Talk to your veterinarian to determine whether this is the case with your dog. Treatment or medication may make big improvements in your dog’s behavior.

Call in a Professional
If your vet has ruled out a medical problem, it’s time to call in a professional dog trainer or animal behaviorist. Because aggression is such a serious problem, you shouldn’t attempt to fix it on your own. A professional can help you figure out what’s causing your dog’s aggression and create a plan to manage it.

To find a professional dog trainer or behaviorist, ask your veterinarian for a referral or contact the Association of Professional Dog Trainers.

Create a Plan
A behaviorist or trainer can help you figure out the best approach for managing your dog’s aggression. In most cases, you’ll use positive reinforcement to teach your dog new behaviors.3

For example, if your dog is mildly aggressive toward strangers, start off by standing far away from someone your dog doesn’t know. You should be far enough away so that your dog doesn’t start to growl or snap. Then, reward with lots of treats and praise as you gradually decrease the distance between your dog and the stranger, continuing to use positive reinforcement.

Ideally, your dog will begin to learn that strangers equal treats and you’ll see a reduction in its aggression. This same procedure can work for getting your dog used to a variety of other situations.

Avoid Punishment
Punishing your dog for aggressive behavior usually backfires and can escalate the aggression.3 If you respond to a growling dog by hitting, yelling or using some other aversive method, the dog may feel the need to defend itself by biting you.

Punishment may also lead to your dog biting someone else without warning. For example, a dog that growls at children is letting you know that he is uncomfortable around them. If you punish a dog for growling, he may not warn you the next time he gets uncomfortable, but may simply bite.

Consider Medication
In some instances, training alone is not enough. Dogs that are aggressive may also need medication to help manage the problem. It’s important to understand that a dog experiencing fear, stress, or anxiety is incapable of learning new things. Think of medication as a tool to help your dog overcome this fear. Many dogs will only need medication temporarily. Talk to your veterinarian about your options.

Handle Unavoidable Situations
Finally, you need to consider whether your lifestyle allows you to stick with a plan. For instance, if you have a dog that acts aggressive towards children and you have kids, it’s nearly impossible to avoid the situation that brings out the aggression. In this case, the best option for you and your dog may be finding it a new home with adults only.