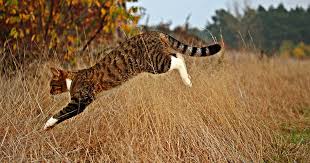 Cat Hunting Behaviors- Should it be encouraged or discouraged? Cat hunting while playing
As a cat owner you may be familiar with the sometimes-startling experience of finding a dead bird, mouse or other small creature around your house. While it may be the thought that counts, many pet owners are often left bewildered by cat behavior and wondering—among other things—if maybe there’s a way to get off their cat’s gift list.

Fortunately, there is, and these ways may include changing up their cat food, their daily schedules, redirecting their behavior and a few other ideas. So, if you’re wondering why a cat that’s regularly fed and given lots of love and attention feels the need to stalk prey, read on—we’ve got insights into why your cat hunts and what you can do about it.

Why Do Cats Hunt? Cat Behavior Explained
In today’s world, cats are seen as our lovable, sometimes aloof, companions. Historically cats were not kept as pets and fed by loving owners. Before they became domesticated, cats had to provide for themselves and hunt for their own food, not unlike their larger tiger and lion cousins.

Limited prey meant only the most adept hunters could survive and reproduce. Believe it or not, your four-legged friend is not far removed from their hunting-savvy ancestors.

There is mounting evidence that even after we domesticated them, cats continued to hunt, likely on rodents feeding off our grains.

Today’s domestic cat, however, hunts more for fun and entertainment. The sight or sound of prey triggers your cat’s hunting instinct, making it near-impossible for them to resist the sound of a bird’s wings flapping or the sight of a darting mouse.

How Do Cats Learn to Hunt?
Cats often learn to hunt the same way most mammals learn how to do things—from their mothers. In many instances, hunting is a learned behavior first taught by their mother and then reinforced and honed by playing with their littermates.

Studies have shown that kittens who had the opportunity to observe their mothers hunt become better hunters than kittens who didn’t. Even so, most kittens who never see their moms hunt can still instinctually figure it out on their own.

While some cats will display their hunting behaviors by playing with their toys or trying to catch a fly, some cats may put this newfound skill to use and eventually bring prey home. This prey can be anything from mice and birds to larger prey like rabbits.

Cat Hunting Strategies
Cats use a seek, capture and kill process when hunting. First, they search their environment for potential prey. Once they’ve spotted something, they will slowly approach, or stalk, the prey until they are close enough to pounce and capture it. Then, they may play with it for a while before killing it, depending on their hunger level and the difficulty or size of the prey. It should be noted that cats do not always kill the prey they catch.

Further, depending on the size and danger posed by the prey, a cat “playing” with their prey may really be the cat’s way of responding to their prey’s movements to protect themselves from getting injured.

Is Your Cat Hunting Because She’s Hungry?
It’s easy for cat owners to assume their cats hunt because they’re hungry, but this is usually not the case. In fact, one study found domestic cats only eat 30 percent of prey killed. If cats relied on their own catches to sustain them, they would have to catch around 10 to 20 animals per day.

That’s a tall order, especially when you consider that, on average, cat hunting attempts are successful less than 50 percent of the time. Therefore, for cats being fed by humans, hunting is more of an activity they engage in when the opportunity presents itself, rather than one of necessity.

Is My Cat Bringing Me Gifts?
When your cat delivers a small dead animal to you, it’s easy to assume she’s bringing you a gift, but is that really the case? It may be similar to the way wild cats provide for their young while teaching them valuable survival skills. Since most domestic cats are neutered, however, and have no young to provide for, they may transfer these instincts to their owners instead.

Alternatively, she may be bringing her spoils home to potentially eat later. If that’s the case, this shows your cat feels happy and safe in your home, even secure enough to trust you in looking over a potential snack for later.

How to Stop Cats Hunting
You should never punish your cat for hunting, as she’s only expressing her natural instincts. That said, if you have an adept hunter in your home, it’s understandable to want to curb her penchant for bringing you her hunting treasures. Fortunately, if you’re wondering how to stop cats from killing wildlife, there are methods you can use.

1. Redirect Hunting Instincts Through Play
Redirecting your cat’s hunting instincts through frequent play is one of the most effective methods in helping to reduce or eliminate her hunting behaviors. Play provides mental stimulation for your cat and helps to satisfy her hunting desires.

Many cats enjoy “hunting” feather wands, but you can try multiple toys to see what your cat likes best. Some cats are excited by toys waved through the air, while others prefer to play with toys they can chase along the ground.

Experiment with different toy types and movements to find the best fit for your cat. This type of play is essential for pet cats, as they don‘t have many opportunities to hunt naturally, which may cause behaviors like biting, pouncing on your feet or being destructive.

2. Get Her a Collar with a Bell on It
Break-away collars with a bell fitted on them can be effective at inhibiting cats’ ability to catch prey. If you’re considering getting a cat collar with a bell on it, always make sure it’s a safety collar that will break away and release if your cat gets caught on anything. Some retailers offer a weighted bib that’s also able to lower a cat’s ability to catch and kill animals.

3. Make Sure She’s Getting Enough Food
If you believe your cat is hunting due to hunger, make sure she’s eating a nutritious and balanced diet. You could also try feeding her smaller meals at more frequent times throughout the day. Make sure you’re feeding your cat the appropriate amount of food based on her age and body condition.

4. Supervise Your Cat’s Outdoor Time
Some pet owners choose to only allow their cat to go outside for supervised outdoor time. This can include putting their cat in a harness, which restricts their ability to engage in hunting behaviors.

Another great way to let cats enjoy the outdoors without being surprised by their prey items is to build a “catio,” where they can observe birds, mice, insects and other would-be hunting trophies, without being able to harm them.

5. Avoid Inadvertently Rewarding Hunting Behaviors
Many owners inadvertently reward and encourage this behavior by grabbing a treat or toy when they see their cat holding a dead animal in its mouth to get them to drop it. This trains the cat to bring even more prey items home to keep being rewarded with treats and playtime.

For more updates click here to join our WhatsApp group