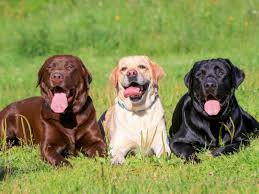 Labrador retrievers are a popular breed—you probably have or know at least one of them. Here are 12 facts about the lovable, hard-working pups.

According to the American Kennel Club, the breed has taken the top spot in its rankings of most popular breeds for 30 consecutive years—the longest reign of any breed in AKC history.

Labrador retrievers were bred to be the perfect water dogs: They have water-resistant double coats that provide insulation, and their short fur keeps them warm but doesn’t drag them down when it gets wet. Their webbed toes also facilitate speedy swimming. Fishermen used the dogs to bring in nets, pull ropes between boats, and recover escaped fish.

3. Their name is a little misleading.

4. The Earl of Malmesbury might have named the breed.

The Earl brought these dogs home with him to England after a trip to Canada, and referred to his new pups as “Labrador dogs” in 1887. Since Newfoundland and Labrador are geographically close, many historians suspect the name is a result of the British commonly lumping the territories together and referring to the whole mass as Labrador. Others believe the name was a nod to the fact that the dogs were often seen swimming in the Labrador Sea.

A combination of new taxes on dogs in Canada and a quarantine of animals imported into England caused the sale of St. John’s water dogs there to come to a screeching halt. Eventually, these original labs went extinct in Canada; the breed survived in Great Britain thanks to kennels in Scotland. Labs were finally recognized by the English Kennel Club in 1903.

6. You can get all three colors in one litter.

Regardless of the parents’ color, a single litter can include black, yellow, and chocolate puppies. There are two genes that cause the pigmentation of the coat, so the variation can be just as common as different hair colors in a human family.

Labrador retrievers are known for their ability to sprint. They can hit 12 miles per hour in just three seconds.

8. A nameless black Lab wandered his way into a Led Zeppelin song.

If you read the lyrics to Led Zeppelin’s “Black Dog,” you’ll notice it’s mysteriously not about dogs at all. The band named the song after a black Labrador that was wandering around the Headley Grange studio while they were recording the album Led Zeppelin IV.

9. A Labrador retriever once went to jail …

After killing the cat belonging to Pennsylvania Governor Gifford Pinchot’s wife, a black Labrador retriever named Pep was sentenced to life without parole. The pooch was admitted to the Eastern State Penitentiary on August 12, 1924. He did about 10 years of hard time, during the course of which he became good friends with the warden. Although it sounds like an urban legend, prison records support the story. (Pinchot, for his part, said the dog was sent there to be the prisoners’ mascot.)

OK—honorary mayor. In 1981, a black Labrador mix named Bosco won the election to be the honorary mayor of Sunol, California, beating out two human candidates for the job. Bosco ran as a “Re’pup’lican” and used the slogan “A bone in every dish, a cat in every tree, and a fire hydrant on every corner.” The punny platform appealed to the residents of Sunol, and Bosco remained the mayor until he died in 1994.

11. Labrador retrievers are the most commonly used breed for guide dogs.

The Guide Dogs of America breeds a lot of Labrador retrievers, as well as Lab mixes. Labs are found to be the best breed for the job, thanks to their strong desire to please. They’re also the right size, easily adaptable, and easily trained.

12. They can be trained to detect cancer.

Thanks to their powerful noses, Labrador retrievers have been trained to sniff out and identify early stages of cancer. Through work with cancer cell samples, dogs can learn to smell the disease. They can make a diagnosis by smelling a patient’s breath, blood, or stool. One of the most successful ways to screen for early stages of ovarian cancer is by letting a lab sniff the patient. Scientists believe the labs sniff out changes in volatile organic compounds that suggest cancer.