8 Tricks to Help Your Cat and Dog to Get Along 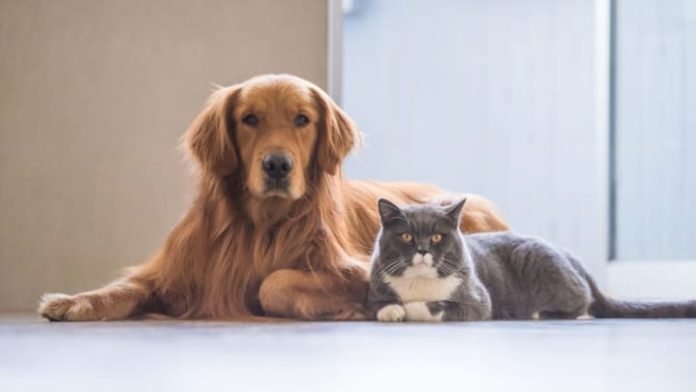 8 Tricks to Help Your Cat and Dog to Get Along

When people aren’t debating whether cats or dogs are more intelligent, they’re equating them as mortal foes. That’s a stereotype that both cat expert Jackson Galaxy, host of the Animal Planet show My Cat From Hell, and certified dog trainer Zoe Sandor want to break.

Typically, cats are aloof and easily startled, while dogs are gregarious and territorial. This doesn’t mean, however, that they can’t share the same space—they’re just going to need your help. “If cats and dogs are brought up together in a positive, loving, encouraging environment, they’re going to be friends,” Galaxy tells Mental Floss. “Or at the very least, they’ll tolerate each other.”

Contrary to popular belief, certain breeds of cats and dogs don’t typically get along better than others. According to Galaxy and Sandor, it’s more important to take their personalities and energy levels into account. If a dog is aggressive and territorial, it won’t be a good fit in a household with a skittish cat. In contrast, an aging dog would hate sharing his space with a rambunctious kitten.

If two animals don’t end up being a personality match, have a backup plan, or consider setting up a household arrangement that keeps them separated for the long term. And if you’re adopting a pet, do your homework and ask its previous owners or shelter if it’s lived with other animals before, or gets along with them.

To set your dog up for success with cats, teach it to control its impulses, Sandor says. Does it leap across the kitchen when someone drops a cookie, or go on high alert when it sees a squeaky toy? If so, it probably won’t be great with cats right off the bat, since it will likely jump up whenever it spots a feline. Hold off Fido’s face time with Fluffy until the former is trained to stay put. And even then, keep a leash handy during the first several cat-dog meetings.

3. GIVE A CAT ITS OWN TERRITORY BEFORE IT MEETS A DOG.

Cats need a protected space—a “base camp” of sorts—that’s just theirs, Galaxy says. Make this refuge off-limits to the dog, but create safe spaces around the house, too. This way, the cat can confidently navigate shared territory without trouble from its canine sibling.

Since cats are natural climbers, Galaxy recommends taking advantage of your home’s vertical space. Buy tall cat trees, install shelves, or place a cat bed atop a bookcase. This allows your cat to observe the dog from a safe distance, or cross a room without touching the floor.

If you don’t have time for any of these activities, Zoe recommends hiring a dog walker, or enrolling in doggy daycare.

In Galaxy’s new book, Total Cat Mojo, he says it’s a smart idea to let cats and dogs sniff each other’s bedding and toys before a face-to-face introduction. This way, they can satisfy their curiosity and avoid potential turf battles.

Just like humans, cats and dogs have just one good chance to make a great first impression. Luckily, they both love food, which might ultimately help them love each other.

Schedule the first cat-dog meeting during mealtime, but keep the dog on a leash and both animals on opposite sides of a closed door. They won’t see each other, but they will smell each other while chowing down on their respective foods. They’ll begin to associate this smell with food, thus “making it a good thing,” Galaxy says.

Do this every mealtime for several weeks, before slowly introducing visual simulation. Continue feeding the cat and dog separately, but on either side of a dog gate or screen, before finally removing it all together. By this point, “they’re eating side-by-side, pretty much ignoring each other,” Galaxy says. For safety’s sake, continue keeping the dog on a leash until you’re confident it’s safe to take it off (and even then, exercise caution).

7. KEEP THEIR FOOD AND TOYS SEPARATE.

After you’ve successfully ingratiated the cat and dog using feeding exercises, keep their food bowls separate. “A cat will walk up to the dog bowl—either while the dog’s eating, or in the vicinity—and try to eat out of it,” Galaxy says. “The dog just goes to town on them. You can’t assume that your dog isn’t food-protective or resource-protective.”

To prevent these disastrous mealtime encounters, schedule regular mealtimes for your pets (no free feeding!) and place the bowls in separate areas of the house, or the cat’s dish up on a table or another high spot.

Also, keep a close eye on the cat’s toys—competition over toys can also prompt fighting. “Dogs tend to get really into catnip,” Galaxy says. “My dog loves catnip a whole lot more than my cats do.”

Read also: How to stop dogs during a fight

8. CONSIDER RAISING A DOG AND CAT TOGETHER (IF YOU CAN).

Socializing these animals at a young age can be easier than introducing them as adults—pups are easily trainable “sponges” that soak up new information and situations, Sandor says. Plus, dogs are less confident and smaller at this stage in life, allowing the cat to “assume its rightful position at the top of the hierarchy,” she adds.

Remain watchful, though, to ensure everything goes smoothly—especially when the dog hits its rambunctious “teenage” stage before becoming a full-grown dog.