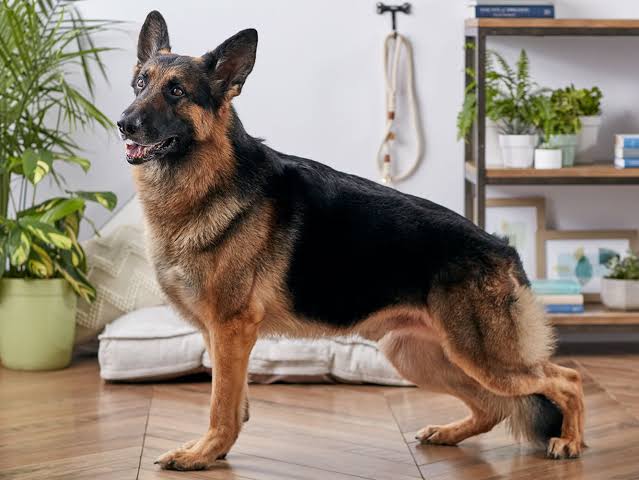 Confident, courageous, intelligent, and gentle—it’s no wonder German shepherds are considered the second most popular dog breed in America. These large dogs are steadfastly loyal and protective of their humans but approach strangers with caution. Originally bred with a strong work ethic, German shepherds have a long history as working dogs who’ve assisted police and militaries across the world. But the average owner doesn’t need to be on the front lines to keep a German shepherd happy. Their calm demeanor makes these dogs great companions for active owners who intend to spend hours at the dog park or afternoons on the trail together.

One of the most recognizable breeds today, German shepherds are celebrated for their impressive balance of power and grace. Weighing 50–90 pounds, these large dogs have an unmistakable presence, with an alert-yet-kind expression marked by their perked-up ears and dark, almond-shaped eyes. According to the American Kennel Club, German shepherds sport what’s known as a double coat: Their coarse outer hair works with the thick, soft undercoat to allow the dog to thrive in just about any climate. But all that hair means German shepherds are prone to shedding, and should be brushed several times a week during spring and fall to keep your dog—and your home—looking its best.

German shepherds are most commonly a mix of black and tan colors, but it’s not impossible to see other variations like all-black, black with red, sable, and even the rare white German shepherd.

As with any breed, it’s important to properly socialize your German shepherd from a young age. A well-adjusted German shepherd will be patient and gentle, the AKC says. Though German shepherds are not outright aggressive, by nature they are very protective of their people. Their guarding tendencies make them natural watch dogs who will protect their territory and alert you to intruders. German shepherds are known to be gentle with children and other pets (even cats!), especially when introduced as a puppy—though it’s important to teach children how to properly interact with dogs, the German Shepherd Dog Club of America says. A tug on the tail or painful pinch to the ear should always be discouraged, even if your pup seems to tolerate it.

Though they may initially have been bred to work hard jobs for long hours—in the trenches on the front lines, or sniffing out contraband on a K-9 unit—the German shepherd today is just as much a family dog as he is a hard worker. While these dogs are able to adapt to various living situations, their high energy and large size makes them a better fit for a house with a physically fenced-in yard. German shepherds can do well in apartments so long as they receive enough daily exercise. These loving dogs can manage in homes with other pets—if properly trained and introduced—but prefer to be the only dog of the home.

German shepherds are extremely loyal to their humans and will put everything on the line for those they love. But their size, energy, and power can be too much dog for some people to handle. “People want a dog that’s going to be protective, so they go out and get a German shepherd,” says Brian Kilcommons, founder of The Great Pets Resort, a boutique training facility in Connecticut. “Yes, they’re protective, but when you really look at the German shepherd, they are also very specific…They like things in order. You need a high degree of control and training for a well-behaved German shepherd. What was bought for protection, when not properly trained can and often does become a legal and financial liability.” If you can’t dedicate time to obedience training, get out of the home for a least an hour of exercise a day. If you frequently need to leave your dog at home alone for hours, this breed may not be the best choice for you.

A German shepherd will be happiest with an active owner looking for a steadfast companion who enjoys spending time outdoors (they make great trail buddies!). It’s important to consider your lifestyle before committing to any dog, but it may be wise to speak with a German shepherd breeder or rescue group about expectations to be sure this breed is a good fit for your lifestyle.

German shepherds have thick, double-layered coats that require weekly brushing to combat frequent shedding. German shepherds shed profusely during the spring and fall, and you’ll want to brush once or even twice a day to keep up with these seasonal changes. Unless they roll in something stinky or take a dive into the occasional mud puddle, German shepherds rarely require baths as most debris can be swept away with a brush.

Regular brushing is also a good time to check for things like coat sheen (dull hair can mean a lack of nutrients in diet), nail length, and ear and dental health. Some German shepherds’ nails are worn down naturally with activity, but if you can hear them tapping against the floor, it’s probably time for a trim.

Read also: 10 tips for taking care of your dog

In addition to regular brushing and dental care, German shepherds are very intelligent, high-energy dogs who need a good amount of mental stimulation and exercise daily. And due to their protective nature, it’s important to begin socialization and training for your German shepherd at a young age. Consistent training through positive-reinforcement techniques will help mold your pup into a well-mannered adult. “Dog training is one of the few things in life that when you do it appropriately, you get immediate results,” Kilcommons says. “People go to group classes for a year and the dog still is out of control, and it’s because they don’t extend their knowledge to what’s really important: how you structure the dog during your day-to-day interactions. Dogs are family members. They get to abide by the same rules, and those rules have to be set the day the dog comes home.”

The German shepherd is considered a generally healthy breed with a lifespan of 7–10 years. Like all breeds, the German shepherd is prone to certain diseases. The German Shepherd Dog Club of America, the official breed club, strongly recommends breeders test for elbow dysplasia, hip dysplasia, and degenerative myelopathy, a neurological disease similar to multiple sclerosis in humans. German shepherds should also receive temperament tests and annual heart exams.

German shepherds are also prone to the following conditions: epilepsy, vision problems, bleeding disorders, immune mediated diseases, hemangiosarcoma, and exocrine pancreatic insufficiency. Of course not all German shepherds will encounter serious health issues, but it’s important to be aware of these common concerns when considering this breed. It’s important to purchase all dogs from reputable breeders who will introduce you to the dog’s parents and siblings. If adopting, ask the rescue for all available health history.

The breed is also prone to bloat, a serious condition that tends to affect larger breeds and can lead to death. It’s important to know the signs of bloat and to seek emergency medical attention if you believe your dog might be suffering from the fatal condition.

German shepherds may be one of the most famous and recognizable breeds in history. The German shepherd originates from—you guessed it—Germany in the late 1800s. According to the GSDCA, German cavalry officer Capt. Max von Stephanitz found a powerful “wolflike dog” at a dog show that exhibited excellent herding skills and required “no training other than direction.” He bred him with the intention of creating a perfect working dog, and his result was the direct ancestor of today’s modern German shepherd. Though the German shepherd’s ancestors were herding dogs, von Stephanitz switched from breeding herding dogs and instead focused on curating a breed for military and police forces. To this day, German shepherds are favored K-9 officers for police and military forces around the world. Many German shepherds served in both world wars as messengers, search and rescue dogs, supply carriers, and sentries.

According to the GSDCA, German shepherds first came to the U.S. in the early 1900s. Their popularity boomed after World War I, when returning soldiers brought them stateside. In 1917, due to the stigmatization of all things German, the AKC officially changed the breed’s name to shepherd dog (similarly, in England, the breed was renamed Alsatian Wolf Dog). It wasn’t until 1931 that the AKC reverted to the original breed name. After World War II, a schism formed between American-bred and German-bred German shepherds. It seemed Americans were more interested in appearances and preferred to highlight attributes that would win in the ring rather than serve on the field, most notably the dog’s iconic sloped back.

Regardless of pedigree, the intelligent, determined German shepherd loves having a job to complete, and its gentle nature and protective demeanor make it a top pick as a household pet.