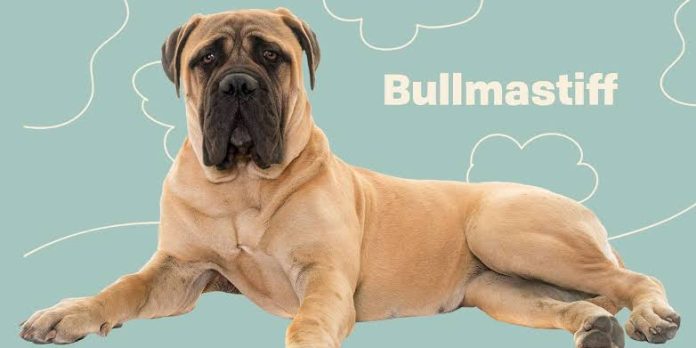 Bullmastiff dogs are loyal, trusting, and gentle giants that offer only great companionship. If you’re fond of big, smart dogs with sweet dispositions, learn more about the lovable bullmastiff

What’s a bullmastiff? Not quite a bulldog or a mastiff, it’s the best of both breeds in one. If you want a well-trained, formidable guardian who also adores you and your children—and welcomes all belly rubs, ear skritches, and full-body hugs, this is the dog for you. Bullmastiffs couldn’t hide their devotion even if they wanted to, as 130 pounds of love heading your way is hard to miss!

Breeders Steve Krulish and Jackie Smith own Stonebull Bullmastiffs in Swanzey, N.H. Smith says bullmastiffs “are intensely loyal with long memories. They don’t seem to feel the need to have other doggie friends, but rather crave human companionship.” So to make sure this dashing pooch has a wonderful life with you, train him well and shower him with affection.

Stately and strapping, with his large head held high and a focused gaze, a bullmastiff is an attractive dog. His sturdy, wide legs support a deep chest, broad shoulders, and sloping hindquarters. He has a square, muscled body inherited from his mastiff ancestor that wiggles slightly when his tapered tail whips at full speed.

His bulldog lineage appears in the wrinkles on his forehead and the folds across his shortened black cube of a muzzle. He’s really not as sad as he appears—quite the opposite. But in true bully fashion, his jowls hang with a slight frown, and his rounded deep-set brown eyes appear a little wistful.

A bullmastiff’s sleek, dense, and short coat is usually fawn or red, with accents of black encircling his eyes and inking his V-shaped ears as they point down the side of his cap.

Under the mammoth physique of a bullmastiff dog is a peaceful cuddle bug who craves your company. While each pup’s personality is unique, a bullmastiff will typically want to be in the same room with you, and perhaps even by your feet, next to you, or actually on you as much as he can.

But this behavior doesn’t happen automatically. Like many working dogs—and dogs in general—a bullmastiff becomes his best self with proper no-fear and positive reinforcement training, starting when he’s about 10 weeks old and after his vaccinations are complete. “It’s been our experience that it takes a certain kind of human temperament for a bullmastiff to thrive in a family environment,” Smith says. “Folks who are comfortable setting realistic expectations for training and behaviors, and have consistent follow-through, would be best.”

As docile and sweet as a bullmastiff’s temperament might be, he’s still more than 100 pounds of canine energy—and that requires loving but firm guidance to control. Training should include setting boundaries early on with a bullmastiff, and don’t stop with puppy kindergarten and socialization training. Continue his training with regular refresher courses so he always understands he isn’t the leader of the family.

Bullmastiffs need a secured, fenced area in which to exercise, and shouldn’t be taken off-leash except in his home environment. Because he doesn’t have to always be on the go like other working breeds, he might do well as an apartment dweller if he is taken outside to stroll and sniff a few times a day.

A bullmastiff won’t need a lot of grooming, but he isn’t always the best roommate for two reasons: slobber and flatulence. He’s a brachycephalic, or flat-faced dog, and he drools a lot; and the way he eats challenges his digestive system, which causes noxious fumes. A veterinarian can advise on how best to keep his mask folds clean and give you methods for mopping up dribbles, and dietary recommendations for—well, the other stuff.

A bullmastiff is a lot to love, but like many large dogs, only for a short time. His average lifespan is 7–9 years. And similar to dogs his size, there are few medical concerns to understand.

One of the biggest issues to be aware of is bloat. Sirois says this is a condition all large, deep-chested dogs are susceptible to—and it can be deadly. Bloat requires emergency surgery so a veterinarian can untwist the stomach, among other things.

“Unfortunately, they’ve done so many different studies looking at what predisposes to bloat, like should they eat and then exercise, should they not, should you raise their bowl, and there’s nothing that has come out as a clear ‘yes, this is likely to cause bloat,'” Sirois says. “So there’s not a lot of good guidelines other than know that it’s a possibility … know what the signs are, and [know] how to jump on it immediately.”