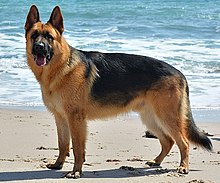 Below we list the eight best dog breeds for single guys. Of course these aren’t the only breeds that would be suitable for men on the prowl, but we think these are 8 great breeds to start with!

I’m a little biased, as I’ve been fond of labs and other hunting breeds my whole life, but they are just great dogs. There’s a reason they are consistently rated as one of the most popular breeds in the world.

Playful, loving and friendly, labs view strangers as friends they haven’t met yet. Friends that may even throw a ball for them. They’re smart and easy to train, although they often overwhelm visitors during the greeting period. Labs do need quite a bit of exercise, so they are great for joggers, hikers and other active types.

Few dogs boast the spunk and ready-to-rock attitude that boxers do. Handsome, friendly and playful, boxers are the not only manly (they have broad shoulders and blocky heads), but they are female-friendly too (they are pretty clean and tidy).

Boxers need a good bit of exercise, so they aren’t ideal for couch potatoes; but they’ll be happy to curl up on the couch with you after a long day of play. Additionally, their short, worry-free coats are a dream for an active single guy, who lacks the time to deal with such things.

Forget most of what you think you know about pits and Am staffs (note that both names essentially apply to the same breed – cue pedantic fight in the comment section). The only frightening thing about pit bulls is their reputation.

Pits aren’t the vicious monsters pop culture would have you believe; most are nothing more than bundles of love, licking and loyalty. Sure, there are bad apples in any bunch, and pits sometimes attract the worst kinds of owners, but trainers often consider the breed too friendly for guard dog work.

As a pet, you can expect your pit to bark at anything unusual, follow you around like a shadow and solicit attention from anything with hands

The exercise requirements of many breeds represent a hurdle that is often difficult to clear, especially for those who prefer patrolling the couch to playing outside.

But all is not lost for the activity-adverse; English bulldogs are one of those lazy dog breeds even less interested in running than you are!

But English bulldogs aren’t only beloved for their couch-potato ways, they are also adorable little buggers, with hearts of gold. They are susceptible to a variety of health ailments; so, they’ll never want to accompany you on a run, but they make up for both with their companionship and cartoonish ways.

The French bulldog is a great choice for you guys that like smaller dogs. They are crazy cute, without being very feminine or obnoxiously tiny. In fact, they’ve got pretty confident personalities! They can be somewhat challenging to train, but if you tap into their desire to play, good results are attainable.

Like their English counterparts, French Bulldogs suffer from a variety of ailments. But on the plus side, the do not require a great deal of exercise, and they are usually comfortable living in apartments. They make friends pretty quickly, and will usually turn into social butterflies when you have company over.

Golden Retrievers are often described as being great family dogs, but that doesn’t mean they need a big family. As long as you give them plenty of attention and love, golden retrievers are just as happy being in a family of only two.

Personality wise, golden retrievers are about as good as it gets. They just want to hang out, play and get some love from their person. But although they greet most humans with a wagging tail and curious nose, they still have a protective side, and are always alert for dangers like car horns, geese, squirrels, and mailmen.

Goldens and Golden mixes do have a long coat and their tendency to shed will wear out that old vacuum you bought at a garage sale, so be sure to step up your carpet cleaning game if you go with a golden retriever.

Great Danes are the quintessential gentle giant. These are loving, calm and thoughtful dogs, who need less exercise than you’d think. Their sheer size and handsome looks are sure to garner plenty of attention while you are cruising through the park, and they are usually polite, if not downright friendly, to most strangers they meet.

However, Great Danes do have one drawback: They produce copious amounts of drool. Unsurprisingly, many ladies find this incredibly off-putting. However, on balance, they still make great, low-key pets for single guys.

Like boxers, huskies represent a great mixture of masculine and feminine qualities. On the one hand, huskies are tough, athletic dogs who were bred to drag heavy stuff across fields of ice and snow – it’s hard to get burlier than that. But on the other hand, huskies are gorgeous, regal-looking dogs, with piercing eyes and an almost luxurious coat.

Huskies are usually friendly, if a bit shy. But once they warm up to someone, they’ve made a new lifelong friend. The only challenges they present are their need for a good bit of exercise and their fur, which will slowly but surely cover everything you own.