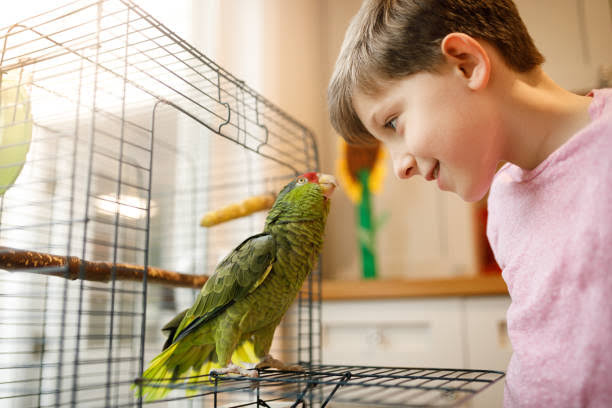 Parrots and other birds have a high degree of intelligence. Several studies have demonstrated that parrots have advanced abilities to problem solve and communicate, and they can even understand human constructed concepts like math (addition and subtraction), shapes, and colors.

2. They don’t require much grooming

Unlike some animals like cats and dogs, parrots don’t require much in the way of grooming. Rather, they will do most of the work themselves.

Parrots are naturally hygienic animals who preen their feathers on a daily basis.

For those who don’t know, preening is just another way of saying “grooming” and is the method that birds use to remove dust, dirt, and parasites from their feathers.

Some animals can cost a fortune to feed, but the parrot is not one of them.

4. They live a long life

Think about it. If you get a dog, you have approximately 10-15 years to spend with them, and then you have to deal with the loss of your best friend.

5. They are easy to train

As we mentioned above, parrots are extremely intelligent. Combine this with the fact that parrots love attention from their owners and training becomes a breeze. Training your parrot to talk, mimic, count, and learn colors can be a great hobby and is a good way to fulfill your time.

Keep in mind, however, that parrots don’t just pick up on things when they are trained to do so. They are always listening and can pick up on words and behaviors even when you’re not trying to train them. So don’t be surprised if one day while you are entertaining guests, your parrot lets out a few swear words that you didn’t expect. (And they’re sure to generate some laughter!).

6. They are very loving and social

When people think about affectionate pets, a parrot isn’t usually the first thing that comes to mind. But the truth is, parrots are actually very social animals that require a great deal of attention. In fact, parrots that don’t get the attention that they need can often act out with behavioral issues, and can even inflict self harm. This is why it is so important that people who own parrots have plenty of spare time to dedicate to them.

When you’re renting a space from a landlord, one of the things that you often need to worry about are pet fees. While some landlords have no problem with you bringing a pet into their space, others will charge a monthly or yearly fee for you to do so. Others will not allow pets at all. In return, your cat or dog may end up costing you more, or you may not be able to rent the place that you would like to rent at all.

There’s no doubt about it that parrots are some of the most beautiful pets in the world. There are actually over 350 different species of parrot in the world, many of which display brilliant, bright, and beautiful colors in their feathers. While the majority of parrot species are considered to be beautiful, there are some that have more brilliant displays of colors than others

9. They have bold personalities

Like people, parrots each have their own unique personalities. This means that they each have their own unique personality traits, their own likes and dislikes, and their own little quirks. They also have different moods. Parrots can have good moods and bad moods just like we can. This makes them seem more human-like and fun to interact with. One minute they could be doing whirlies on their perch and the next they could be headbanging to rock music. With a parrot, you never know what they might do next – it keeps life interesting

When you own a parrot the party never stops! Just throw on some music and you always have someone to dance with! Don’t believe me? Just type in “dancing parrots” on Youtube and check out some of the absolutely adorable and hilarious videos that come up.

The most popular dancing parrot of them all is known as “Snowball the dancing parrot”. Snowball has many videos posted on YouTube including dances to “Another one bites the dust”, “Shake ya tailfeather”, “Billie Jean”, and many other of our favorite songs. And the best part? He knows how to keep a beat better than most humans!

Read also: tips on what to feed your family bird pet

Parrots don’t just dance, they also headbang (no, I do not consider headbanging a form of dancing). Again, if you don’t believe me just head to YouTube and look up “Headbanging parrots”. You’ll find parrots headbanging to hard metal and rock music, as well as punk music. It’s hilarious and adorable all at the same time – and a great way to keep yourself and your guests entertained.

Though parrots do strive to please their owners, there’s no making a parrot do something that they don’t want to do. Parrots are extremely confident and are true to who they are. If they don’t want to eat something, they aren’t going to. And if they want something, they will not hesitate to let you know. It’s one of the things that make parrots difficult to deal with, but also one of the things that their owners love most about them.

13. They will always let you know their needs

Some pets can be difficult to read, but the parrot is not one of them. Parrots are extremely easy to read because they will always let you know when they need something.

Though you don’t have to bathe your parrot often, giving them a bath every now and again can be quite entertaining. Because they all have their own unique personalities, some parrots love the water and others hate it. But when a parrot loves the water, they can provide hours of endless entertainment in the bathtub or sink. What’s more, many parrots will even be happy to hop in the shower with you! And there’s nothing like singing in the shower with your parrot!

15. They can get along with other pets

For the most part, parrots can get along with other pets. As long as they are introduced slowly, parrots can cohabitate with cats and dogs. Having said that, cats and dogs should never be left unsupervised with your parrots, as natural instincts could kick in and your parrot could be at risk of attack.

Read also: 8 ways to protect your pets from diseases

When you own a parrot, there is never a dull moment. All you have to do is walk into a pet store with a parrot and most people will instantly have a smile on their face. Why? Because parrots are funny. Though it’s not yet proven by scientists, parrot owners have little doubts that parrots have a sense of humor. This is proven by some of the things that they do.

17. They will watch TV with you

As I mentioned before, if you have a parrot, you are never alone. Parrots are extremely social birds and want nothing more than to be in your company. That means that they will do almost anything with you – including watching TV. Of course, I wouldn’t expect your feathery friend to be quiet during the whole show, but they do make good couch potato companions. Other things you can do with your parrots? Dishes, search the internet, vacuuming, cleaning, walking, and pretty much anything else you can think of

18. You can take them for a walk with you

Just because parrots have wings doesn’t mean you can’t take them outside with you. If you are someone who likes to go on walks each day, your parrot can come along with you too. If their wings are clipped, you can just put them on your shoulder and they can come along with you. If their wings are not clipped, be sure to put them on a harness just to be safe – the last thing you want is for your friend to fly away from you.

Want to attract some attention to yourself? There’s no better way to do it than with a parrot! If you are to take your parrot for a walk down the street, you can guarantee that you will attract visitors. People love parrots, and a parrot that talks is even better. They are a great way to meet new people, and a great conversation starter – no more awkward “hellos”, because your parrot gives you something to talk about!

20. You will always have a best friend by your side

In the wild, parrots are monogamous birds. This means that they mate with one other parrot for life. In captivity, parrots obviously aren’t mating, but that doesn’t mean that they aren’t still faithful. When you own a parrot, you are accepted into their flock. Parrots generally bond closely with one specific person and when they do you will have a faithful friend for life.