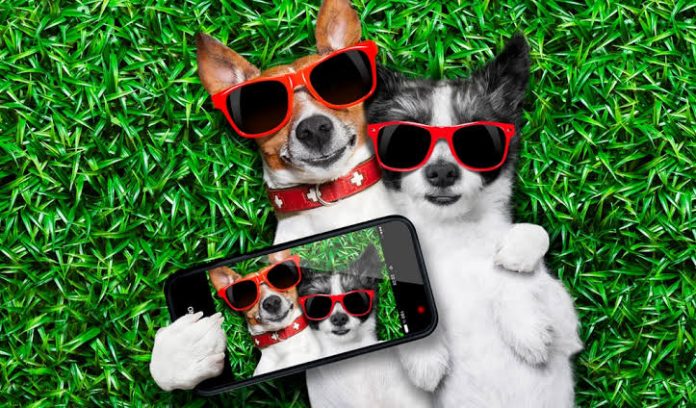 The dog’s social structure has been referred to as a pack hierarchy, but this does not accurately or entirely describe the relationship of dogs with other dogs or with people

Scientific studies into the behavior of wild wolves have established that the wolf pack is actually a family unit, with the adult parents guiding the activities of the group. The dog likely originated from the grey wolf 12,000–14,000 yr ago, although the origins of domestication may extend back 30,000 yr. Communication and relationships are established through a language of visual signals (body postures, facial expressions, tail and ear carriage, and piloerection), vocalization, scents, and pheromones. However, domestication and selective breeding have led to extensive variation not only from wolf to dog but also between breeds and individuals in morphology, breed traits, temperament, behavior problems, variation in behavioral neoteny, and social signaling. In fact, Huskies retain most of the social signaling repertoire of wolves, German Shepherds less than ⅔, and Cavalier King Charles Spaniels the least. Thus, it may be difficult for dogs (and people) to read and interpret the signals of other dogs, especially those of different breeds. Early and frequent socialization with a wide variety of dogs is therefore an important component of intraspecific communication

The term dominance (see Dominance:) does not describe the relationship between two individuals; it is a relative term established by the value of the resource to each individual and the cumulative effects of learning.

Hierarchy in dogs is neither static nor linear, because the motivation to obtain and retain a specific resource, together with previous learning, defines the relationship between two individuals for each encounter. Stability is maintained by deference and not by agonistic behaviors. Only in those relationships in which one individual consistently defers to another across resources and interactions might a linear hierarchical relationship between the individuals be described. Although this terminology applies to the intraspecific communication and signaling between members of a species (eg, dog-dog), it does not “translate” to communication between species (eg, dogs-people)

Relationships with people are not established by dominant/submissive social signaling; they are a result of genetics, early handling, and socialization and shaped by learning and consequences. In fact, dogs have acquired an ability and readiness to respond to human behavior not found in wolves, even if the wolf pup is hand raised and socialized. In turn, dog owners must learn to read canine visual signaling and vocalization to understand when dogs want to engage and when they do not, as well as to train and reward relaxation and to safely and effectively modify fearful and aggressive behavior

The first important period of development is the neonatal period, which extends into the third week of life. Puppies are born with closed eyes and limited motor ability. Puppies are altricial; therefore, in the first few weeks, maternal care is critical. Grooming by the mother arouses the puppy to eat, stimulates elimination, and helps to keep the puppies in the nest. Good maternal care results in an increased ability to handle stress and increased maturation of the nervous system. Similarly, mild stress in the form of gentle human handling during the first 2 wk of life can improve cardiovascular performance and resistance to disease. Handled puppies also mature faster, perform better in problem-solving tasks, and are better able to withstand stress as adults. In contrast, moderate to severe prenatal and neonatal stress as well as maternal separation can have a sensitizing effect on the hypothalamic-pituitary-adrenal axis. Feeding the bitch a diet enhanced with docosahexaenoic acid during the neonatal and prenatal periods has been shown to improve the puppy’s brain and retinal development and trainability

Between the neonatal and socialization period is a transition period, during which the eyes open and puppies begin to develop motor skills. At this time, interactions with littermates are important for development of social skill

The next period of development (socialization or sensitive period) extends from 3–4 wk to ~12 wk of age. During this period, the puppy is most sociable and will most readily habituate to dogs, people, other animals, and the environment (sights, sounds, odor, touch, taste). Between 3 and 8 wk of age, puppies start exploring their environment and continue to refine social skills with their littermates and other dogs. Weaning is normally completed at 7 wk of age, and at ~8 wk of age puppies start developing a preference for elimination location

As the socialization period winds down, puppies make attachments less easily. Therefore, a lack of adequate socialization and enrichment during the sensitive period can contribute to excessive responses to stimuli, including fear and aggression. Spending the first 7–8 wk with the mother and littermates plays an important role in the development of social skills with other dogs. However, if exposure to people, other pets, and new environments does not begin before the end of the socialization period, the dog may become socially maladjusted and unable to cope and communicate. Proper development of social skills can be accomplished in part by adopting puppies into the new home at ~8 wk of age and enrolling in puppy socialization classes before 12 wk of age, so that the puppy can be exposed to a range of dogs, people, and other stimuli (eg, novel surfaces, noises, odors, moving objects, uniforms, and handling) in a controlled, instructional, and positive environment. Similarly, visits to the veterinarian or groomer, car rides, visitors to the home, and the use of sound desensitization recordings provide additional opportunities for exposure. Dog appeasing pheromone and the presence of another dog may also ease adoption into a new home. If there are any signs of fear, every effort should be made to overcome the fear by finding the limits (threshold) the dog will tolerate and using food and treats or toys to try to ensure a positive outcome. Continued exposure to a wide variety of stimuli with positive outcomes should be continued to adulthood.

The third (juvenile) period extends from ~3 mo to 1 yr of age. Domestic dogs reach sexual maturity at 6–9 mo (later in some giant breeds) and social maturity at 12–36 mo of age. Social relationships are established to minimize conflicts within the group. Although heredity and previous socialization play important roles in the behavior of an individual, positive exposure to a wide range of animate and inanimate stimuli during this period should minimize development of fear and anxiet

Domestic dogs are nonseasonal breeders and have on average two heat cycles/yr (range one to four). If the female does not get pregnant, she will go through hormonal changes as if she were pregnant, known as false pregnancy or pseudocyesis, which can be associated with overt physiologic and behavioral changes, including lactation, nesting, and protective aggression of objects such as toy

Veterinarians and staff should work with breeders, trainers, pet stores, and shelters to ensure that the newly adopted dog gets off to the right start. For puppies, this includes advice on socialization, normal canine behaviors (eg, jumping up, play biting, elimination) and how they can be managed, a household environment that provides appealing but safe outlets for all of the dog’s behavioral needs (eg, chewing, social play, object play, rest), guidance on canine communication, and learning principles of reinforcement-based training. The goal should be to reinforce desirable behaviors and to ignore or prevent undesirable behaviors. Clicker training can be particularly useful to immediately mark and reward desirable behavior and gradually shape behaviors that more closely approximate the final outcome (duration, relaxation)

Oral behaviors are a common problem, because puppies have a behavioral need for exploration and play. Therefore, providing constructive social activities that do not include mouthing or biting of people, such as tug games, retrieving, walking and running, chasing, hide and seek, playing with other dogs, and training for rewards, gives the dog something positive on which to focus. A head halter is also an option for better control of the head and muzzle. Another way to manage oral stimulation and exploration is to provide chew toys, food-stuffed toys, and food-dispensing toys. When the puppy cannot be effectively supervised, the household should be set up to ensure success (and avoid failure). Preventing undesirable behaviors while providing the dog with options acceptable to the owners and the dog gives the dog control to make choices, reduces uncertainty and anxiety, and prevents undesirable behaviors. Of particular value to establish a safe haven is a crate, exercise pen, or room to provide security and safety for the dog when it cannot be supervised or wants to be alone. A daily routine can be established that provides stability and predictability for the dog, beginning with meeting the dog’s social and physical needs, followed by sessions of inattention during which the dog is given the opportunity to nap and rest or to engage in exploratory play with its food and chew toys. By confining the dog to a crate, pen, or room during these “inattention” times, the dog learns to spend time on its own; this also may prevent damage to property, housesoiling, and even separation anxiety. Undesirable behavior might alternatively be prevented through environmental management (eg, child gate, shutting doors, tie downs, deterrent devices). Neutering males may also help to prevent testosterone-influenced behaviors such as urine marking, mounting, and roaming.