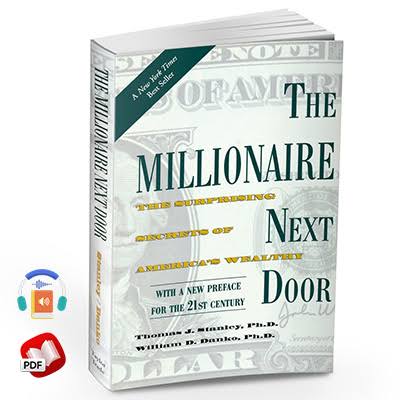 The Big Ideas That Made “The Millionaire Next Door” a Classic

It turns out, courage is key

Published in 1996, The Millionaire Next Door has become a personal finance classic.

It’s easy to see why. The book has a great “hook”: the idea that millionaire status is attainable by regular people. In fact, many regular people living in your neighborhood are unassuming millionares.

The subtitle — The Surprising Secrets of America’s Wealthy — is what we would call “click bait” in the internet age (“Surprising” and “Secret” are classic click bait words).

The book also gives some counter-intuitive advice for how to conduct yourself in order to have the best chances to accumulate wealth.

Before we break down the big ideas that I love from the book, a word of caution. The information from the book comes from studies done by the authors that consist of interviews of millionaires.

It seems reasonable: If you want to be rich, find out what the rich did and copy them. Many books and articles are based on this premise.

There’s a potential flaw in the premise though: What if not everyone who followed the same strategies ended up wealthy?

When it comes to money, I tend to think this applies less than normal, because it’s easy to point out the mechanistic connection between many habits of the wealthy (e.g. living below your means, investing), and building wealth.

Still, it’s something to be aware of.

Big Ideas I Loved From the Book

Most Millionaires Are First Generation Rich

Yes, some millionaires inherited some or all of their wealth. But most didn’t.

Read also: 7 assets that will make you rich

According to the authors, they’ve consistently found that 80–85% of those that they interview have built their wealth on their own.

It also seems like among the self-made millionaires, only a minority are rock-stars, athletes, lottery winners, etc. You don’t have to get lucky to build wealth, you just need discipline.

Wealth is more often the result of a lifestyle of hard work, perseverance, planning, and, most of all, self- discipline.

The Millionaire Next Door (Kindle Edition)

In fact, they list the odds at becoming rich through one of those glamorous paths at less than one in four thousand. Yet a full 3.5% of the population has a net worth of $1 million or more.

The advertising industry and Hollywood have done a wonderful job conditioning us to believe that wealth and hyperconsumption go hand in hand. Yet, as I have said many times, the large majority of the rich live well below their means.

Preface to The Millionaire Next Door

Most millionaires know how much their household spent last year on various categories such as clothing or housing.

Read also: 4 habits which can make you a millionaire

Courage is a Major Key

Some of my favorite quotes from the book have to do with courage. Instead of describing them, here are some direct quotes:

How do we define courage? Courage is behaving in a way that conjures up fear.

Courageous people, entrepreneurs, recognize the fear in what they are doing. But they deal with it. They overcome their fears. That’s why they are successful.

It takes considerable courage to work in an environment in which one is compensated according to one’s performance. Most affluent people have courage. What evidence supports this statement? Most affluent people in America are either business owners or employees who are paid on an incentive basis. Remember, whether their parents were wealthy or not, most of the affluent in America acquired their wealth on their own. They had the courage to undertake entrepreneurial and other business opportunities that were associated with considerable risk.

Parents often ask us how to instill courage in their children. We suggest that children be exposed to the sales profession. Encourage your children to run for class office in their elementary or high school. They will have to sell themselves to the student body. Even selling Girl Scout cookies can have a positive impact. Retail sales jobs provide another way for children to be evaluated by very objective third parties.

My Two Favorite Stories From the Book

The book has lots of interesting stories, but my two favorite have to do with courage.

One of the greatest entrepreneurs and extraordinary sales professionals of all time, Ray Kroc, looked for courage in selecting potential McDonald’s franchise owners and executives. Kroc actually welcomed cold- calling sales professionals. He told his secretary to “send all of them in.” Why? Because it’s not easy finding people who have the courage to be evaluated strictly on their own performance. He sold his first franchise outside California for $ 950 to Sanford and Betty Agate (see John Love, McDonald’s: Behind the Arches [Toronto: Bantam Books, 1986], pp. 78– 79, 96– 97). Kroc first encountered Betty Agate while she was making cold calls on people in Chicago’s financial district. Kroc’s secretary asked, “What the hell is a Jew doing selling Catholic bibles?” “Making a living,” was her reply. Kroc reasoned that anyone courageous enough to do what Betty Agate was doing would be a prime prospect for purchasing one of his franchises.

I’m only going to include the beginning of this one to get you intrigued. If this short quote doesn’t make you feel something you might be a robot:

I then asked her how she first became involved in the real estate profession. Laura replied, “Out of necessity.” Laura told me that one morning she found a note from her husband on the kitchen table. Allow me to quote the contents: Dear Laura, I’m in love with my secretary. My attorney will fill you in on the details. Wish you and the children good luck.

There’s obviously a certain sense in which entrepreneurship is risky. Many businesses fail. Many aspects of starting a business can be risky such as borrowing money, accumulating inventory, and hiring people.

But there are risks to being employed as well. One of the biggest risks: You only have one source of income.

I like the way it was put in this section:

A professor once asked a group of sixty MBA students who were executives of public corporations this question. What is risk? One student replied: Being an entrepreneur! His fellow students agreed. Then the professor answered his own question with a quote from an entrepreneur: What is risk? Having one source of income. Employees are at risk…. They have a single source of income. What about the entrepreneur who sells janitorial services to your employers? He has hundreds and hundreds of customers… hundreds and hundreds of sources of income.

Get Rich By Working For the Rich

They mention that on average the rich are very frugal in general, but there are some areas where they are willing to pay top dollar.

In general, they are willing to spend good money on doctors, dentists, lawyers, and accountants.

The authors forecast that since many millionaires are getting older, one profession that will be in huge demand is estate attorneys.

Of course, there may be some other ways to serve the rich at a high price point that don’t involve advanced degrees, so it’s worth pondering whether you already have anything to offer.

The benefit of serving the rich is that they have good money to spend. The disadvantage of high-status professions like doctor and lawyer is that they encourage people to spend lavishly, whereas the wealthy built their wealth through thrift and investment.

The Dangers of “Economic Outpatient Care”

If you do become rich, you need to be careful about how you share that wealth with your adult children.

The authors painstakingly document how financial gifts to adult children make it less likely that they themselves will accumulate wealth.

It’s easy to value and protect money you worked hard for, whereas it’s easy to spend money if it’s someone else’s.

Many wealthy parents see their kids — who are just starting in their careers — not being able to afford a high-status lifestyle. So they subsidize them. This breeds entitlement and makes it unlikely that the adult children will strive as hard to work their way up.

The Seven Factors of Wealth Accumulation

✅Living below your means

✅Allocating your time, energy, and money in ways that build wealth

✅Not receiving “economic outpatient care” from your parents

The book was published in 1996. Surprisingly, much of it does hold up. But there are definitely parts that seem dated.

In particular, the surveys of millionaires asking them the most they’ve ever spent on suits or watches. The idea is that millionaires are frugal in these areas, whereas less wealthy people sometimes spend more.

This may still be a problem in certain pockets, but society has gotten much less formal when it comes to attire in the quarter-century since the book was published.

Of course, maybe it’s a bigger problem than I think and I just don’t roll in the right circles.

Some Material Better Suited for a Sequel

The authors are eager to share all their results, which I appreciate. But the book’s “hook” is how a regular person can become a millionaire.

Near the end there is an extensive discussion of how millionaires think about their estate planning. This is interesting and potentially useful, but not part of the hook.

I know there are sequels to this book (which I haven’t read), maybe this material could have gone in one of them. One book that tells you how to get rich, another that tells you what to do when your rich.

This is a common problem though. I would estimate that 95%+ of all non-fiction books are longer than they should be. I get it, the author and the publisher want to make it look like you’re getting value from the number of pages. But most books would be better, more powerful, and more memorable if they were shorter.

This book is certainly worth a read. They share a lot of data which is helpful in reminding you that while they are identifying clear trends, not every millionaire fits the mold.