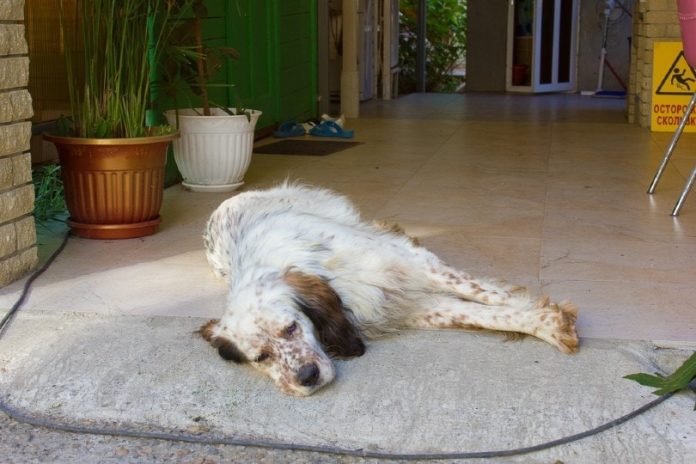 When your dog reaches a certain age, you know that it’s just a matter of time before you have to say goodbye. Hopefully, your canine companion lives a long and full life of happiness and many games of fetch and tug-o-war. But the truth is, each of us eventually must part ways with our best friend.

In the final months of your dog’s life, you can see the signs that things are coming to a close. If you watch carefully, you’ll know exactly how you can best comfort your canine and ensure that its final days are full of love and spent as comfortably as possible. At the same time, you need to prepare yourself. Losing a beloved pet is always hard, but losing one unexpectedly is even harder.

The following 15 signs could indicate that your dog is coming close to its time. Any of them alone isn’t much of an indication, but if your pet pal is exhibiting several of these signs, then it might be time to start preparing for the worst. Here are the 15 signs your dog may be dying:

1.They Lose Control Over Their Bladder

Incontinence, or lack of control over urination, often becomes a problem for old dogs. On its own, this isn’t an indication that your dog is at death’s door. But in conjunction with some of the other signs on this list, it could be an indicator.

Generally, if your dog is experiencing incontinence but is still acting normal in all other regards, such as still having energy, playing around, and being happy, then the dog is probably not quite nearing the end of its life. Still, if you notice your dog is having trouble controlling its need to urinate, then you should take it to the vet.

As your dog reaches the end of its life, it may start to exhibit some strange breathing. It could be irregular for a short while before returning to normal and repeating. You might see rapid breathing or very slow breathing. They might seem to be laboring hard just to get the air to come in and out.

If strange breathing patterns are the only sign on this list that you’re seeing from your dog, then call the vet right away. More than likely, your dog has a treatable condition that’s causing the issue. But as dogs age, their bodies begin to break down and lose normal function. When you see your dog breathing irregularly and they’re showing several of the other signs on this list as well, then it’s likely that your dog’s time is nearly done.

3.It’s No Longer Interested in the World Around it

Dogs that are close to death often seem to completely stop caring about the world around them and the things they normally busied themselves with. You might first notice that your dog stops coming to greet you at the door. Maybe it no longer plays with its favorite toys. These can be heartbreaking for you in more ways than one.

Your dog hasn’t stopped coming to the door because it stopped loving you. Rather, your dog is old, and several other issues make it difficult for it to do things it used to do. They’re more tired, they might be in pain, and they could even have mobility problems making it hard for them to get around or even get up.

Many dogs begin to develop stomach issues as they get close to their final days. At this ripe old age, their digestive system just isn’t functioning like it once did. Plus, your dog’s appetite could be experiencing changes that can also cause stomach problems. Some problems are minor like nausea, but many dogs throw up or get diarrhea.

Problems like these can occur in dogs that are not close to death as well. They are associated with many different diseases; not just death. If your dog is experiencing gastrointestinal issues, it’s best to take them to a vet to get professional advice.

When people realize their time is coming, they often want to be close to the ones they love most. Things aren’t very different for your dog. As the end of its life approaches, your dog might turn to you in search of comfort, causing them to be clingier than usual. They might be following you around, laying on you every chance they get. Make sure to cherish this time you get together.

Though most pet owners would probably love for their dog to act like this towards the end of their time together, it doesn’t always happen. Many dogs actually do the opposite and try to spend more time alone in an effort to hide their illness.

Changes in the color of your dog’s gums can indicate that its organs are no longer functioning properly. They can change to blue, white, red, or become pale; each of which can mean something entirely different. But your dog’s gums changing colors doesn’t necessarily mean they’re dying, though it does mean medical attention is necessary.

Blue gums can mean that there’s not enough oxygen in your dog’s blood. This could be from problems with the heart or lungs, or even from illnesses like pneumonia. Red gums can be a sign of heatstroke. White gums can be from a lack of blood flow, which might be caused by internal bleeding. However, each of these colors could also be a sign that your dog is close to death; particularly when accompanied by other signs on this list.

A random twitch or muscle spasm here or there is not a sign that your dog is dying. It’s perfectly normal for a dog to twitch at random, and it happens to humans too. What’s not normal is intense twitching that lasts for more than a few seconds or even causes your dog to fall over. This could be indicative of a much more serious issue.

Of course, even exaggerated twitching doesn’t necessarily mean your dog is knocking at heaven’s door. It might be from something minor, such as dehydration. Or, it could be caused by pain, or by the loss of muscle control that sometimes accompanies old age.

Dogs tend to lose a lot of their energy and spunkiness as they reach old age. By the end of their life, they’re not moving around too much. Instead, they spend most of their time just lounging around. Granted, dogs will also do this when they’re sick or sometimes when they’re depressed, but it’s also the case that dogs close to death tend not to move much.

Your dog might not show interest in playing, preferring to just lay on the ground. They may no longer wish to accompany you on walks. On their own, these signs aren’t a clear indicator of being close to death, though when coupled with other symptoms on this list and old age, it’s quite likely that your dog’s time is nearing.

When your dog is reaching advanced age, muscle control begins to falter. Muscle strength also declines, making it difficult for your dog to move like it used to. This can affect balance and cause your dog to lose its coordination.

Most illnesses can cause a change in your pooch’s appetite, so this isn’t a clear sign of being close to death by any means. But the reality is that dogs often stop eating or alter their eating habits as their final days approach. Unexplained alterations in your dog’s eating patterns are the kind that are worrisome and could mean the end is near.

It’s not just changes in eating that your dog might start showing towards the end of its life. Also common is a decreased interest in drinking. Your dog could practically cease drinking altogether as the final day gets close.

Other times they start to lose heat and will have a lower body temperature than normal. You can keep your dog comfortable through this stage by using heated blankets, heating pads, and hot water bottles. Make sure to also call your vet to get a professional opinion.

As you might expect, your dog probably isn’t feeling its best in the final stretch of its lifespan. They could be sick, in pain, uncomfortable, and going through a lot of changes all at once. This can lead to them becoming irritable; growling or snapping at you when they would never do that before.

Your dog might simply be in pain and afraid of you accidentally pushing the wrong area. They might be attempting to protect themselves. Regardless, you ought to speak to the vet about any sudden behavioral changes you notice in your dog.

Read also: The most common dog illnesses symptoms and treatment

Many dogs seek out solitude when they know their time is getting close. You might find that your dog is suddenly going to empty parts of the house to be alone and doesn’t seem as interested in company or being touched. It’s probably best just to give your dog the space it desires, even though it might hurt to do so.

Dying dogs often experience weight loss in the weeks leading up to their demise. It could be rapid or gradual, but soon, the dog begins to waste away as its body shuts down. If your dog is on in years and is showing signs on this list accompanied by major weight loss, then it’s probably time to start saying your goodbyes.