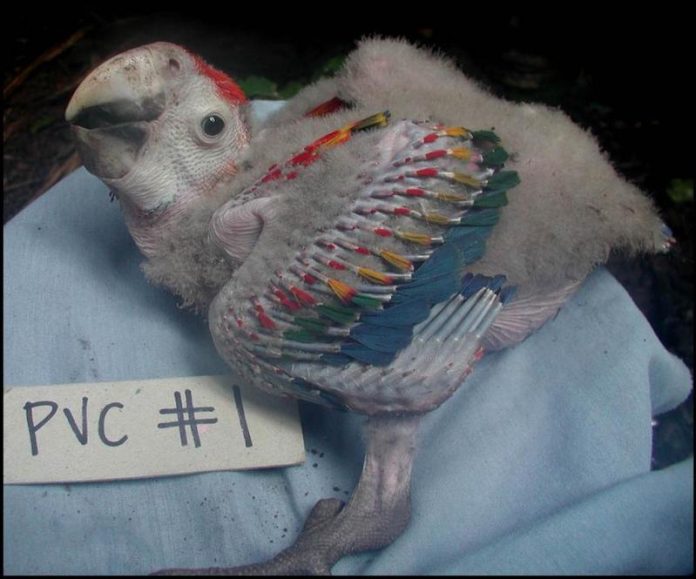 Avian nutrition has greatly improved in recent decades but remains a common problem for pet birds. Formulated diets in pellet form and even organic formulated diets are now available, and domestically raised birds generally accept these readily. However, the nutritional requirements for individual species are still largely unknown. Many birds are still fed inadequate diets. The two most common reasons for malnutrition include allowing birds to choose what they want to eat from mixtures of seeds and nuts and pellets or feeding a pure seed or seed-based diet. Many of the illnesses seen in pet birds have their basis in malnutrition. These include liver disease, kidney insufficiency, respiratory impairment, musculoskeletal disease, and reproductive problems.

Some special nutritional concerns in pet birds should be noted. Individual birds may be sensitive to the dyes and preservatives that are added to some seed and pelleted foods. Mold that contaminates improperly stored seed and pet-grade peanuts can cause liver disease, so be sure that any feed is fresh and is properly stored.

Be aware of what your bird actually eats and drinks. Many owners provide a varied diet for their birds to eat (such as table foods, formulated pelleted diet, vegetables, and other foods), but fail to realize that what the birds actually consume is mostly seeds, which can lead to nutritional deficiencies and imbalances. Also, birds do not like the taste of most vitamin and mineral supplements added to water. This not only makes them ineffective, it can also lead to decreased water consumption and dehydration.

Obesity is common in companion birds. High-fat diets (seeds, nuts, and many table foods), overabundance of food, and a sedentary lifestyle are all contributing factors. Obesity is defined as a bird being 20% over its ideal weight. Galahs, macaws, Amazon parrots, and quaker parrots are prone to obesity. Signs may not be evident, but obese birds may become lame or have difficulty breathing due to excessive weight and fat.

Obese birds should be fed a pellet diet with portion control. Exercise should be encouraged by providing a larger cage with multiple, dispersed food bowls to encourage movement. Rope or spiral rope perches will encourage climbing and balance. A flight cage outdoors should be provided for flighted birds, with walking or climbing stairs encouraged for nonflighted birds. Obese birds are more prone to develop arthritis, fatty liver disease, coronary artery disease (atherosclerosis), and heart disease.

A deficiency of vitamin A frequently goes unrecognized in pet birds. Birds that eat a substantial portion of their diet as seeds and nuts are most prone to this problem. Seed- and nut-based diets are deficient in more things than vitamin A. Conversely, excessive vitamin A supplementation can cause serious side effects, including reproductive failure, bone abnormalities, and liver disease in some species.

The diets of all pet birds should be evaluated for vitamin A and vitamin A precursor content. Vitamin A deficiency may be the underlying cause of chronic conditions such pododermatitis, sinusitis, and conjunctivitis. Birds with reproductive disease on poor diets should be considered deficient.

Signs of vitamin A deficiency depend on which organ system is affected (for instance, the reproductive, digestive, or respiratory tracts). Signs include nasal discharge, sneezing, swelling around the eyes, difficulty breathing, increased drinking and urinating, poor feather quality, feather picking, and anorexia. White plaques may develop in and around the mouth, eyes, and sinuses. The spots ultimately become infected, forming large, obvious abscesses. The abscesses can distort the glottis (opening of the windpipe), causing labored breathing and eventually suffocation. The abscesses can even grow so large that they block the choana (the slit in the roof of the mouth). When this happens, the bird will exhibit profuse nasal discharge and obvious swelling around the eyes.

The best preventive against vitamin A deficiency is to provide a formulated diet with sufficient, but not excessive, vitamin A precursors. A precursor is a substance that can be converted into vitamin A in the body. These precursors, such as beta-carotene, are much less likely to cause the toxicity that can occur with excessive vitamin A consumption.

Some birds, particularly lories and lorikeets, may need a decreased amount of vitamin A in their diet to avoid conditions such as iron storage disease of the liver.

If your bird is not on a formulated diet, foods containing vitamin A or its precursors include cantaloupe, papaya, chili peppers, broccoli leaves and flowers, sweet potatoes, turnip leaves, collards, endive, butter, liver, egg yolks, beets, dandelion greens, and spinach.

Goiters caused by iodine deficiency used to be a common problem of pet budgies and still occur in certain areas. The thyroid gland in budgies is normally about 3 millimeters long, but can enlarge to more than 1 centimeter. Classic signs include loud or harsh breathing, wheezing, or clicking. Regurgitation is seen in some severe cases. Affected birds tolerate stress poorly. Lugol’s iodine (1 drop per 1 cup [250 milliliters] of drinking water) can be used to treat the deficiency. The bird should be switched to a pelleted diet that includes sufficient iodine to prevent the formation of goiters.

Seed diets are known to lead to an imbalance in the calcium to phosphorus ratio in birds, as well as creating amino acid deficiencies. This ratio is important because calcium, phosphorus, and vitamin D3 work together to perform vital functions, and a lack of or excess of any of these nutrients can affect the body’s ability to use all of them. Sunflower seeds, which tend to be preferred by many pet birds of the parrot family, are low in calcium, deficient in amino acids, and high in fat. Safflower seeds are actually higher in fat content than sunflower seeds, contrary to popular belief, and also contain inadequate amino acids and calcium. Providing a nutritionally sound diet that includes only a limited amount of seeds and nuts will help prevent these imbalances.

Imbalances of these important dietary elements can lead to metabolic bone disease, also known as nutritional secondary hyperparathyroidism. It occurs in young and older pet birds. African grey parrots are prone to low calcium and vitamin D3, which may present as bone malformations of long bones and vertebrae.

Read also:  Tips on what to feed your family bird pet

This syndrome, caused by deficient levels of calcium in the blood, is characterized by weakness, tremors, and seizures. The exact cause is unknown, although parathyroid hormone abnormalities and vitamin D3 requirements in this species of parrot are being studied. Treatment with calcium may lead to immediate improvement. In cases involving calcium deficiencies, your veterinarian may prescribe calcium supplements and exposure of the affected bird to outdoor-quality light for several hours each day. This light would include light in the UV (ultraviolet) spectrum. Exposure to UV rays is important because UV light can help your bird use calcium more efficiently. Bulbs and tubes emitting UV light are often available. (Note: these are not the same as plant lights.) Your avian veterinarian or a bird expert can recommend bulbs or tubes that provide the essential UV rays.

Although excess calcium intake is not thought to cause problems in most cases, excess vitamin D3 can cause harmful calcium accumulation in tissues such as the kidneys. Supplements should be used carefully, and excess vitamin D3 should not be given to susceptible species, such as macaws.

Iron storage disease occurs when too much iron accumulates in the liver. The body needs a certain amount of iron to produce hemoglobin, which is the molecule that transports oxygen molecules from the lungs to all the other cells in the body. However, when too much iron builds up, the body begins to store it in the liver, then the heart, lungs, and other organs, where it can do significant damage, eventually leading to death. Death may occur without previous signs.

The condition is common in pet mynahs and toucans, as well as certain zoo birds such as the bird of paradise. It has also been reported in pet birds of the parrot family, particularly lories. Although iron storage disease seems to be associated with excessive intake of dietary iron, not all birds become affected when kept on similar diets. Stress or genetic factors may also play a role. Certain foods rich in vitamin C, such as citrus fruits, increase dietary iron uptake. Excessive vitamin A consumption may also be involved.

It is recommended that low-iron diets be given routinely for pet mynahs and toucans, and commercial formulas are available. Certain foods such as peaches, plums, honeydew melon, and apples without skin are low in iron. Bananas, mangoes, papaya, summer squashes, and boiled potatoes without skin are a bit higher in iron content but can still be within the acceptable range. Foods to avoid include baby foods and juices and nectars that contain iron, foods that are enriched with iron or ferrous sulfate (including table scraps), animal products, such items as primate biscuits, and large quantities of citrus fruit.