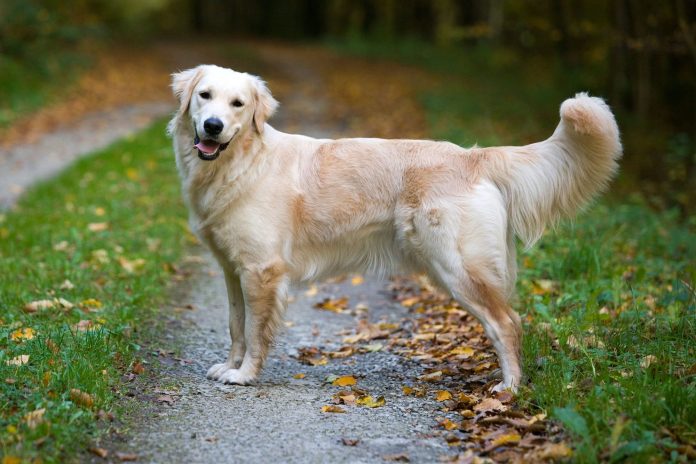 Golden retrievers are smart, loyal dogs that are ideal family companions. With their gentle nature, shining coats, and charming smiles, they are considered one of the most popular breeds in America. Learn more about living with these people-pleasing pups.

The golden retriever is one of the most popular dog breeds in the U.S.—for good reason. They are simultaneously wonderful family pets—thanks to their friendly, tolerant attitude—and capable, intelligent working dogs. These sturdy, medium-sized dogs grow to about 55–75 pounds and typically live to be about 10–12 years old. Outgoing, trustworthy, eager-to-please, and easy-to-train, they are especially popular with families with young children. Goldens often maintain their fun-loving puppy attitudes and signature smile into adulthood.

Part of the sporting dog group, golden retrievers are active dogs that require at least an hour of daily exercise. They live up to their name; they love retrieving just about anything thrown for them. This makes them excellent hunting companions and skilled service dogs. They love to eat, run, spend time with their owners, and even participate in obedience and agility events.

Adult male golden retrievers grow to be 65–75 pounds, while females are 55–65 pounds. Their coloring ranges from light golden to cream, and dark golden to golden, and their physique can vary from broad and dense to leaner and more sporty. According to AKC standards, goldens move with a smooth, powerful gait, and the feathery tail is carried, as breed fanciers say, with a “merry action.”

Golden retrievers shed often and a lot, so they require regular brushing. Thanks to their breeding as hunting and waterfowl-retrieving dogs in the Scottish Highlands, their outer coat is dense and repels water. They also have a thick undercoat. Their coats can vary in texture from wavy to straight. Heavy feathering appears on their chest, the backs of their legs, and tail.

In general, golden retrievers are outgoing, playful, and gentle. They are also friendly, intelligent, and devoted. “Golden retrievers are special because they are the perfect family dog,” Ryan Steen, DVM, medical director at Frey Pet Hospital in Cedar Rapids, Iowa, says. “From a personality perspective, you’ll be hard pressed to find a more loving, outgoing, eager-to-please companion.” Early in their lives, they are perfect for playing with children in the backyard. As they get older, most golden retrievers become docile and calm.

Bred to be working retrievers, goldens have a lot of energy and require a lot of activity. They are best suited for owners with an active lifestyle and they thrive in a home where someone is around during the day to spend time with them. They don’t do well when left at home on their own; they love their humans too much.

Because goldens were bred to work with people, they are eager to please their owners and enjoy having a job to do, like retrieving the newspaper or waking up the kids. Their happy demeanor often draws attention from other people when you are out and about—goldens get along well with strangers and other dogs. While they are not considered good guard dogs—they’d be more likely to show an intruder where the treats are than send the intruder running—golden retrievers are excellent service dogs thanks to their loyalty, intelligence, and stable temperament.

Read also: How to properly care for your English Bulldog

A golden retriever needs to live inside near the people he loves most. They see themselves as part of the family and need to be treated as such. Luckily, goldens are not bothered by noise, commotion, and activity, making them very tolerant of children. Golden retrievers also take a “the more the merrier” approach to having other pets in the home. With proper introductions and training, goldens can be trusted with other dogs, cats, rabbits, and other animals. A golden retriever would do well reigning over a large fenced-in yard, so if you don’t have a lot of outdoor space or you live in an apartment, make sure you get your golden outside regularly.

“Anyone considering getting a golden retriever should know they are getting a loyal companion, but one that sheds. A lot,” Steen says. Owners should get used to having a fair amount of dog hair on clothing and furniture around the home. They have a thick, water-repellant double coat that sheds moderately in the winter and summer, and heavily in the spring and fall. However, if you brush your golden daily, you can prevent tangling and remove some dead hair before it covers everything in sight. Baths can also help and are recommended about once a month, but make sure the golden is fully dry before brushing begins.

Golden retrievers will also need their nails trimmed about once or twice a month. A good indicator of when they need to be trimmed is when you can hear them clicking on the floor. Teeth should also be brushed at least two or three times a week. Ear checks are important as well; goldens have fold-over ears, which create an environment that encourages bacteria and fungus to grow. Look for redness or a bad odor and simply wipe out the outer ear with a cotton ball dampened with gentle, pH-balanced ear cleaner to help prevent infections.

Exercise is an essential part of a golden retriever’s day. At least one hour a day of rigorous activity is necessary, even if that happens over several different outings or play times throughout the day. Goldens can be taken on long runs, bike rides, hikes, and swims. They also enjoy hunting trips, field trials, and other canine sports like agility, obedience, and tracking.

A golden that doesn’t get enough exercise is likely to exhibit undesirable behaviors like digging and chewing. Mental challenges, such as learning tricks and playing with puzzle toys, are also appealing to goldens, but should never replace physical activity. Take it easy with exercise in a golden retriever’s first two years of life, as their growth plates are still forming. Don’t go for long, strenuous runs or hikes until the dog is fully grown, and always opt for grass over concrete.

Early socialization and puppy training classes are important with golden retrievers. Puppies should be exposed to a wide variety of people, places, and situations to help them become well-adjusted in their young life.

When it comes to feeding time, owners need to help golden retrievers manage their intake; they have a tendency to become overweight. Food should be measured out and given twice a day rather than leaving food out all the time. Dog treats should be given in moderation. If you’re unsure whether your golden retriever is overweight, give him the eye test and the hands-on test. First, look down at him. You should be able to see a waist. Then place your hands on his back, thumbs along the spine, with the fingers spread downward. You should be able to feel but not see his ribs without having to press hard. If you can’t, he likely needs less food and more exercise. Chat with your vet about the best course of action.

Golden retrievers typically live to be about 10–12 years old. According to Steen, they are a generally healthy breed, but goldens are at a slightly increased risk of hip dysplasia and cancer when compared to other dogs. Other health conditions, although not particularly common, include elbow dysplasia, cataracts, progressive retinal atrophy—or gradual deterioration of the retina—hypothyroidism, gastric dilatation-volvulus (otherwise known as bloat), and allergies. Golden retrievers should also have their ears checked often and teeth brushed regularly for optimum health.

Dudley Marjoribanks, the first Lord of Tweedmouth, developed golden retrievers in the mid-to-late 1800s. Although at one time a rumor indicated that golden retrievers descended from Russian sheep dogs, they were, in fact, bred in the Scottish Highlands. Marjoribanks bred the dogs for more than 50 years to create an ideal gundog—he was an avid hunter of waterfowl. Tweedmouth wanted a dog suited to the rainy climate and rugged terrain of the area, so he crossed his “yellow retriever” with a breed that is now extinct, the Tweed water spaniel. He also wanted the dog to be even-tempered in the home.