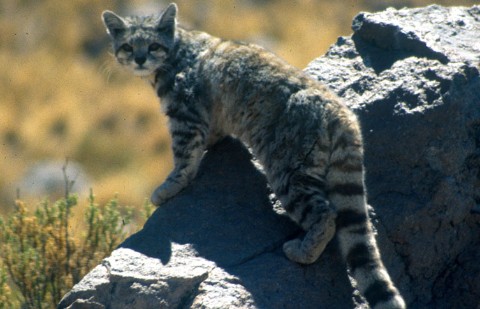 We all know lions, tigers and jaguars, but their popularity often overshadows the diverse range of smaller felines living on our planet.

The animals we call cats, both domestic and wild, belong to the family Felidae. They can be found roaming wild across Europe, Africa, Asia and North and South America. They have adapted to a range of habitats, from tropical rainforests to the extremes of deserts and mountain ranges.

Read also: Top 12 most expensive cat breeds in the world: Ashera Vs Savannah

Meet some of the fantastic felines found around the world.

Margays and ocelots look similar. But margays are smaller cats with larger eyes and a longer tail.

The margay (Leopardus wiedii) is a wild cat species found in Central and South America. It’s mostly seen in forested areas but will also exploit abandoned plantations and land used for agroforestry, where trees and shrubs are grown around crops and pastures.

This cat is nocturnal and hunts birds, lizards and some small monkeys, as well as other mammals such as agoutis and squirrels. They mostly hunt from ground level, but also have impressive arboreal skills and will rest high up in trees.

Margays look like ocelots, which have an overlapping range – both have brown fur with rows of dark rosette markings. But the margay is a smaller cat with a body length of about 50 centimetres. It also has a shorter head, larger eyes and a longer tail.

The International Union for the Conservation of Nature (IUCN) lists Margays as Near Threatened. These cats have long been illegally traded for their spotted fur and sometimes the exotic pet trade, but they also face the threat of habitat loss and fragmentation, roads and retaliatory killing.

The Andean mountain cat is very elusive, living up at elevations of up to 4,400 metres in South America.

Until the end of the 1990s, there were very few sightings of the Andean mountain cat (Leopardus jacobita), but recordings of this cat have increased considerably in the last two decades.

This elusive species is native to the Andes Mountains in South America, found at elevations from 650 metres to more than 4,400 metres. Its habitat is extreme: it’s arid, the temperatures can be very low and the terrain extremely steep.

With a body of about 60 centimetres long, this feline is larger than a domestic cat and the pampas cat, which it is sometimes mistaken for.

The Andean mountain cat predominantly eats rodents. Around 50% of its diet is made up of mountain viscachas, a long-eared rodent that looks a little like a rabbit.

The IUCN lists this wild cat as Endangered, with only 1,378 mature individuals in the wild. A reduction in prey, habitat loss and fragmentation, and hunting are threats to this species.

Scottish wildcats are the only truly wild cat found in Britain, but there are very few left. These individuals were photographed in captivity at the British Wildlife Centre in Surrey.

At a glance, you could easily mistake a Scottish wildcat with a house cat, with its tabby colouration similar to some of their domestic cousins.

The Scottish wildcat, however, is a slightly larger and heavier animal with a more robust skull. It also has a thick tail with a blunt black tip and dark banding. Scottish wildcats are a subpopulation of the European wildcat (Felis silvestris) and are Britain’s only wild cat species. They are typically found in woodlands and shrubland near forests.

There are only approximately 100-300 Scottish wildcats left. Hybridisation with domestic cats is one of the major threats to this species’ survival. There are programmes in progress to survey their populations, such as by Scottish Wildcat Action.

Pallas’s cats are small and stocky. They’re also not very fast, preferring to hide rather than running away from predators.

Pallas’s cats (Otocolobus manul), are a small, stocky species about the same size as a domestic cat. They hunt small mammals – pikas make up about 50% of their diets.

These cats are found in central Asia, usually in high-altitude grasslands and shrublands. They’re often found around rocky areas and places where there is enough vegetation cover to hide them from predators as they move around their habitat.

Rather than running away, Pallas’s cats prefer to hide from predators using their ash grey fur as camouflage or taking refuge in rocky areas and animal burrows.

They are listed as Least Concern by the IUCN, with an estimated 58,000 mature Pallas’s cats living worldwide. However, there are no current programmes monitoring the population, and as they are at risk from habitat degradation and being hunted by humans, their actual status isn’t certain.

The rusty-spotted cat is one of the smallest felines in the world.

The rusty-spotted cat (Prionailurus rubiginosus) is one of the smallest cat species in the world, with a body length of about 40 centimetres. It has only been recorded in India, Sri Lanka and Nepal.

Relatively little is known about how this species behaves in the wild. Rusty-spotted cats are believed to be predominantly nocturnal and prey on birds and rodents. They have been observed hiding in trees, likely to avoid larger predators.

The IUCN lists this species is as Near Threatened, close to being considered Vulnerable. The cats face risks from habitat loss and fragmentation as land is converted for urban expansion, industry and other human uses.

The sand cat (Felis margarita) is the only truly desert-dwelling cat in the world, found in parts of northern Africa, the Middle East and central Asia. They are a small species, with bodies about 51 centimetres long.

Sand cats are known to survive in temperatures of 40°C in summer down to -25°C in winter. They will generally escape extreme heat by spending the day underground in burrows that they dig or co-opt from other animals. They then emerge at night to hunt when it is cooler.

These cats mostly prey on small rodents such as jerboas, spiny mice, gerbils and jirds, but will also hunt small birds, reptiles and sometimes locusts. When prey is hidden underground, sand cats will dig to find it. They will also occasionally cover up their kills with sand and return for them later.

These desert specialists don’t need regular access to water, getting all that they need from their prey – although they will drink if water is available.

A jaguarundi’s long body, short legs and rounded ears can make them look a little like an otter from some angles

The jaguarundi (Herpailurus yagouaroundi) looks a little bit like an otter, with an elongated body of about 70 centimetres, rounded ears, a small snout and short legs. But it is a wild cat found in central and South America.

Jaguarundis live in a range of habitats from rainforests to deserts, but in more open areas they usually stick to vegetation for cover. They are very agile when moving above ground through the trees. They hunt during the day, usually preying on small mammals, birds and reptiles.

There are several colour morphs of this species, even within the same litter. These cats can be dark brownish-black, grey or reddish yellow.

Jaguarundis are another species at risk from habitat loss and fragmentation, particularly caused by the expansion of agriculture. They are commonly killed for preying on poultry and will sometimes be caught in traps set for more commercially valuable species.

Clouded leopards (Neofelis nebulosa) are found in parts of southeast Asia, as far south as the Malay Peninsula. The species is also known as the mainland clouded leopard to help distinguish it from the Sunda clouded leopard that is found on Borneo and Sumatra.

The clouded leopard gets its common name from the cloud-like pattern of black and dark grey blotches along its body. Compared to other cat species, it also has quite short limbs and an exceptionally long tail and canine teeth.

These cats have an average body length of about 85 centimetres. They are usually found in rainforests and are highly arboreal (meaning living in trees) and nocturnal. They hunt a variety of animals including primates, deer, pangolins, rodents and birds.

Clouded leopards are listed as Vulnerable by the IUCN. They are at high risk of habitat loss due to extensive deforestation. They are also hunted by humans, with their skins, bones and meat all desirable in the illegal wildlife trade. Live animals are also sold as exotic pets.

Caracals are found in Africa, the Middle East and central Asia. One of their identifying features are their large tufts.

Caracals (Caracal caracal) are a wild cat species found in Africa, the Middle East and central Asia in a range of habitats from semi-desert to open savannah. These are medium-sized, stocky cats with a body length of about 74 centimetres and are easily identified by their sandy fur, distinctive black stripes on the forehead and large ear tufts.

Caracals will hunt small- to medium-sized mammals, including smaller antelopes, as well as reptiles, rodents and some plants. They are also excellent bird hunters, able to leap up more than four metres to capture their prey in mid-air.

These cats are at risk from retaliatory killing by farmers, as they will sometimes prey on livestock. Habitat loss and fragmentation are also problems for this species, and it may be close to extinction in parts of its range, such as India.